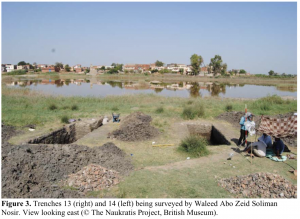 The port of Naukratis was the earliest, and for a period the only, Greek port in Egypt. Established in the late 7th century BC as a base for Greek (and Cypriot) traders and the port of the royal Pharaonic city of Sais, it was an important hub for trade and cross-cultural exchange long before the foundation of Alexandria. Previous fieldwork by Petrie and Gardner (1884–1886: Petrie 1886; Gardner 1888), Hogarth (1899–1903: Hogarth et al. 1899, 1905) and Coulson and Leonard (1977–1983: Coulson 1996, Leonard 1997, 2001) concentrated on the central areas of the town, and further research is clearly required to fully understand this very important archaeological site.

Since 2012, the British Museum has been engaged in new fieldwork at Naukratis, supported by the Honor Frost Foundation, the British Academy (Reckitt Fund), the Institute of Classical Studies, London, and Christian Levett and the Mougins Museum of Classical Art. This work is part of the British Museum wider research project ‘Naukratis: Greeks in Egypt’, which examines ancient Naukratis in the context of Greek-Egyptian relations (cf. Villing et al. 2013–2015).

Reports on the project can be found below, the 2019 report is in both English and Arabic;