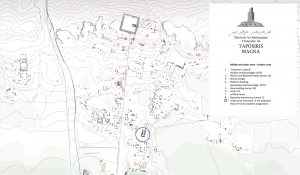 The city of Taposiris Magna developed from the 3rd c. BC onwards on the taenia, a ridge which separates the Mediterranean Sea from its hinterland. Extending on more than 30 ha, the site, occupied until the early 8th c. AD, owes its prosperity to its location, 45 km west of Alexandria, in Mareotis. Designated as the western gateway to Egypt by Emperor Claudius, it is the hub of a vast port system in Mariut basin. Its harbour –partially immersed by the lake Mariut– is together with that of Marea, one of the two major port complexes west of Alexandria.

The French archaeological mission launched in 1998 is the first to undertake a sustained investigation of Taposiris’ harbour. By crossing archaeological soundings and integrated paleoenvironnemental study it challenged previous theories and demonstrated that the port complex was artificially dug in marshy areas in the 2nd c. AD, linked to a long canal forming an artery from Marea to the western border. A major reconfiguration took place at the end of the Byzantine period with the construction of warehouses and public buildings. They testify to a great development for Taposiris between the 6th and 8th c., linked to its function as port city, and connected to a series of settlements along the shores west of Alexandria.

The new hypotheses on the origin and functioning of the port, and the importance of its Byzantine phase, made it necessary to carry out an extensive archaeological campaign in the western part of the port, where numerous facilities and administrative buildings have been surveyed but never explored. The aim was to identify phase by phase, from its development in the Roman period to its abandonment, what the port landscape looked like in relation to environmental changes and link its evolution to urban history.

In 2022, the excavations carried out to the west of the Roman bridge of Taposiris Magna revealed the existence of an urban district bringing together several public buildings erected in the 7th c. AD. One of them, well preserved, presents characteristics of a public building : monumental staircase and paved rooms with benches and colonnade. The nature of these buildings remains to be determined, but it is tempting to associate them with administrative/economic activities linked to the harbour system renewed during the Byzantine and Islamic transition. These buildings also present rapid successive modifications (transformation of spaces and internal communications, raising of floors), which shows the interest given to this district at this period. It highlights the intensity of the activities in an area that is definitely strategic, between the port canal and the city. These elements offer an interesting study case on the organisation of a lake harbour the during the Byzantine and Islamic transition.