Looking through the eyes of an ancient navigator: Exploring the role of local land and seascapes for ancient navigation along the Egyptian coast of the Red Sea - 2019 - ongoing

The evidence from the archaeological sites such as Ayn Sukhna, Wadi el-Jarf, Mersa/Wadi Gawasis, Myos Hormos (Quseir al-Qadim), and Berenike have shown that ancient Egyptians and later Greeks and Romans undertook successful trading expeditions to the southern regions of the Red Sea and beyond. Voyaging along the Red Sea coast, ancient seafarers used several navigational cues or landmarks to navigate. Archival research has brought to light some important navigation landmarks used by the ancient navigators of the Red Sea. Some of these have been described in ancient maps, historical accounts, and during latter periods in ship logs and journals. This proposed research project aims to investigate these geographic features that ancient navigators used at sea. Such an inquiry will provide better understanding of the nature of ancient navigation and the land and seascapes that were experienced on voyages along the Egyptian coast of the Red Sea.

By video and audio mapping of selected navigational features, supplemented with 3D visualisation, this project applies a new approach to navigation studies in maritime archaeology. In doing so, the proposed research project endeavours to collect a type of data that will help to answer fundamental questions such as how ancient navigators chose their land and seamarks, at what distance such landmarks are visible to the naked eye, what factors influence their visibility, the challenges faced while navigating the Egyptian coats of the Red Sea, and how navigators solved them. Answers to these questions will add to our knowledge and understanding of ancient forms of navigation in the Red Sea. 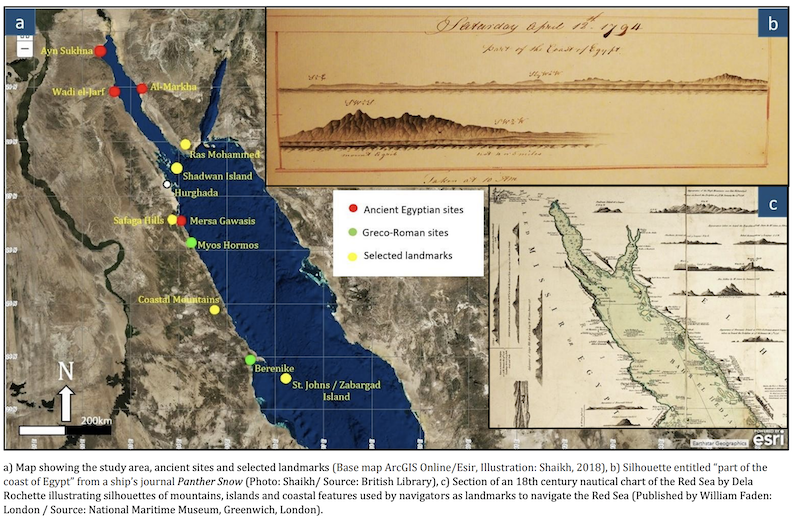