The Wadi el-Jarf project aims to study the various aspects of an Ancient Egyptian harbour on the Red Sea shore (Suez Gulf), built during the reign of Khufu, around 2600 BCE. The site is divided over several locations – a storage area, consisting of galleries cut in the mountain about 6 km to the west of the seashore, several camps and dwelling places, and a large L –shaped pier (200 x 200 m), oriented to the north, that was built directly on the sea, and which probably represents the oldest artificial sea harbour so far known in the world. The project started in 2011, and we excavated both the caves area and different installations on the seashore including a camp about 200 m away from the sea, where 100 stone anchors from the Old kingdom were found in 2013. For the 2019 season, we continued the excavation of the caves system and the study of a big square building (57 x 33 m) which is most probably an administrative building linked to the harbor – during the 2018 campaigns, levels dated to the reign of Snefru, predecessor of Khufu, were found there, showing that the occupation of the site is slightly older that previously thought. We will make some additional excavations on the camps where the anchors have been found in 2013, to have a more precise datation of its occupation (to try to identify material predating the reign of Khufu). In the meantime, a team of divers from the Ministry of Antiquities of Egypt will work in the harbour basin for the third season, if the authorization to work is given to them (last year, this operation had to be cancelled for security reasons at the last moment). The knowledge of all the components of this site – and of the connection that exist between them, will help define more precisely the main features of a harbour at the beginning of the pharaonic era.

The ninth campaign of the archaeological mission to Wadi el-Jarf ran from 10 March to 5 May 2019. Work was conducted simultaneously on three separate sites. One part of the team continued studying the site’s complex of storage galleries, while another continued the excavation, for the fourth consecutive year, of the large rectangular building located midway between the coastal zone and the mountain zone (Intermediary Building, Zone 5). Some additional work was also conducted on excavations of the seashore installations, near the jetty. In addition, a team from the Egyptian Ministry of Antiquities working in partnership with the mission undertook a third excavation campaign in the port basin from 20 April to 5 May. The examination of the transport and positioning techniques applied to the limestone blocks that sealed the system of storage galleries, which had begun last year under the supervision of Emmanuel Laroze and Franck Burgos, was also continued during this campaign.

Our knowledge of the Wadi el-Jarf site has improved considerably over this last campaign. One of the most spectacular advances is due to the study conducted this year by Claire Newton on the paleobotanical remains collected over several years from the different parts of the site. This analysis has provided important details regarding the foodstuffs allocated to the teams who populated the port of Wadi el-Jarf, and this data complements and confirms information drawn from accounts found on papyri on site. At the same time, analyses of the wood remains have provided surprises. While the identification of cedar and pine was expected, these species having been known in Egyptian nautical construction for a long time, the identification of chestnut wood in this context is evidence in this period of more complicated exchanges that are not limited to contacts with the Levantine coast. Even more important in the study of the site, the presence of ebony, sometimes unworked, is the first indication of the use of Wadi el-Jarf port as a departure point for southern regions of the Red Sea from whence such species could be imported. The ongoing analyses of resinous products discovered in large quantities in the galleries might also provide important information on this point.

A detailed analysis of the final closure and abandonment of the galleries has led to a more precise understanding of the conditions of temporary closing and reopening of these storage spaces, while confirming the existence of at least two distinct phases of use. The latest observations of the two ensembles of galleries during excavation have proved promising since they seem to show that, in contrast to what we have long thought, the galleries were not systematically emptied by the Egyptians when the site was definitively abandoned, and that at least some of them remained closed with their original contents, even if this material was ultimately disturbed and damaged by erosion of the tunnels, infiltration of water, and occasional looting. And lastly, the continued examination of the different installations located between the modern road and the coastline is providing new data on the workings of the port itself (potential identification of an assembly and launching point of the craft) and a better understanding of the original installation period on the site of Wadi el-Jarf. Examination of the first occupation level in Zone 5 has meant that we can now clearly attribute this to the reign of Sneferu.

In 2020, the excavations were led on three distincts sectors : the area of the storage galleries, the “intermediate building”, and the shore installations.

— On the galleries area, we started the excavation of 4 of the rock-cut magazines out of the 11 that belong to the second set of galleries. Thousands of sherds of storage jars were found inside, which were systematically inscribed to the names of the teams that were using it. The full corpus of those inscriptions will allow us, at the end of the program, to evaluate the impact of those various teams of sailors on the site.

— The excavation of “zone 5” allowed both the study of a vast building 57 m long and 32.50 m across, probably in operation / in use under Cheops (phase II) and reoccupied in its abandonment levels under the reign of Chephren (phase III). This building itself is built over/atop a previous occupation of the site (phase I), which we attribute to the reign of Snefru on the basis of two fragmentary seal imprints discovered at this level. The excavation of this ancient phase, began in 2018, continued into 2020, making it possible to identify the whole northern extension of this older occupation (fig. 1). Scribal equipment was found there.

— Finally, we re-excavated the exceptional deposit of 100 boat anchors, which were discovered in 2013, still stored in the space between two camps about 200 m from the sea hore (fig. 2). This operation was intended to improve their photographic coverage, but was also an opportunity to carry out a more systematic registration of the marks written on these anchors by the teams that stored them there (fig. 3). The corpus of these could thus be brought, at the end of the campaign, to a set of 70 documents, consisting of 32 “red marks”, essentially naming the boats to which these anchors belonged (fiig. 4), as well as the teams that were assigned to them, and 38 “black marks” – drawn for the most part by means of a piece of charcoal – identifying phyles and sections which are the subdivisions of these same teams . This corpus thus allows us to obtain an image of the last fleet of Cheops which frequented the place – before the final closure of these seaside buildings. As part of the preparation of the publication of this deposit, detailed drawings of a dozen of these anchors was made, thanks to the grant from the Honor Frost Foundation (fig. 5). 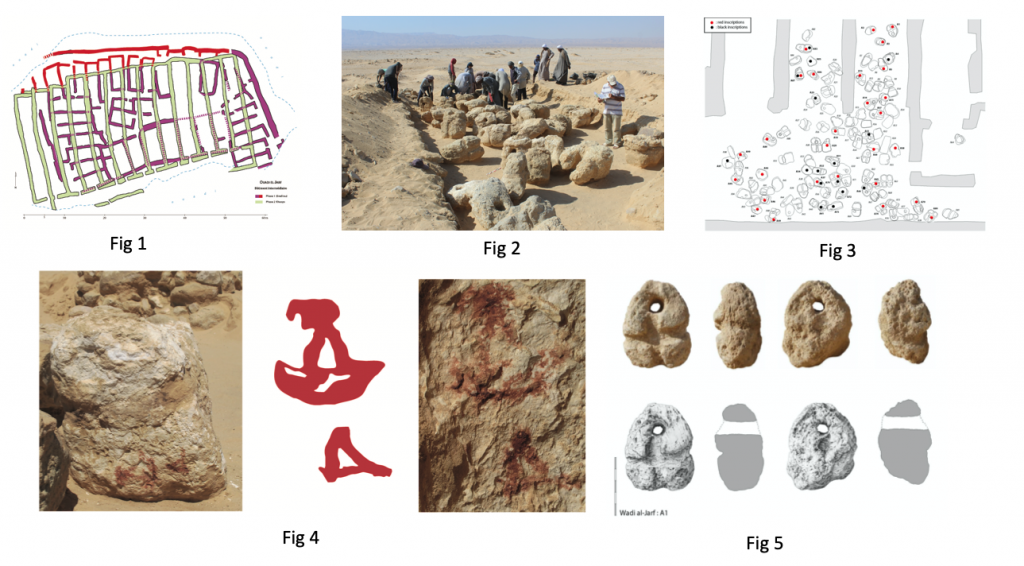 The eleventh campaign of the Wadi el-Jarf archaeological mission took place from March 14th to April 20th, and from September 12th to October 15th, 2021. Due to the health crisis, the number of mission members had to be reduced to a minimum again this year. Despite everything, three areas of the site have been partly excavated during the course of these field operations: the G18-28 gallery sector ; the littoral zone (zone 6) which has been the subject of final verifications; and the “intermediate building” zone, the documentation of which has been continued. 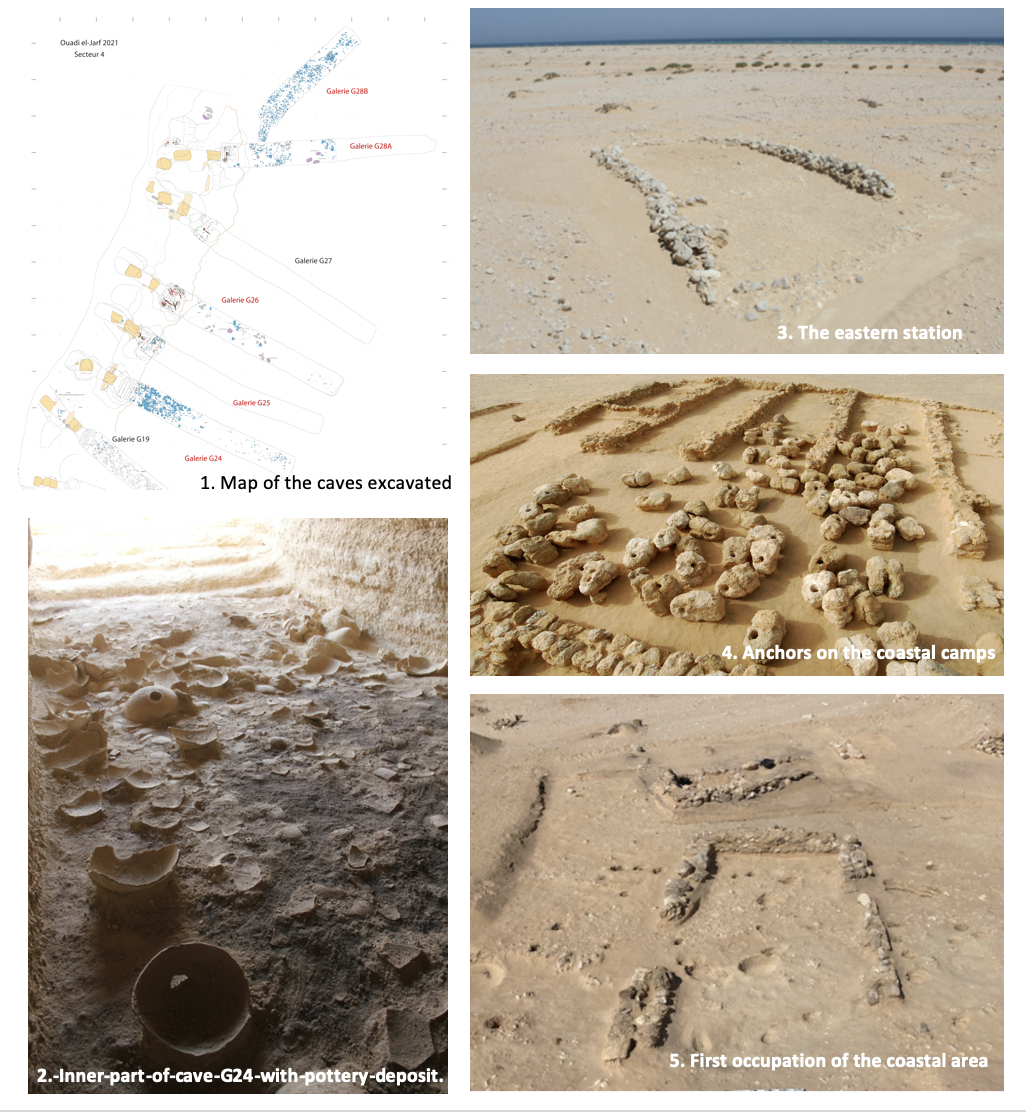