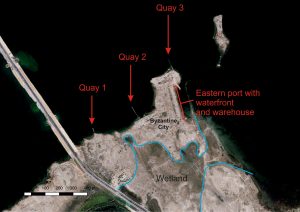 Marea is situated on the south coast of Lake Mariout around 45 km away from Alexandria. Occupying around 15 ha, it is one of the largest settlements from the Byzantine period located in north-western Egypt. According to Herodotus, the settlement had been a military outpost on the Libyan border that later developed into an important part of Alexandria hinterland. During archaeological excavations conducted by different expeditions (including Egyptian, Polish, American and French) buildings from the Byzantine period (4th–7th c.) were identified; most importantly, baths, a saqiya, a church, a chapel, shops, harbour warehouses and a mill. Other structures, coming from the Roman and Ptolemaic period, have been investigated to a much lesser degree. They include the remains of tower houses from the 3rd c. BC, metallurgic workshops from the 1st c. BC and pottery kilns from the 1st–3rd c. CE. 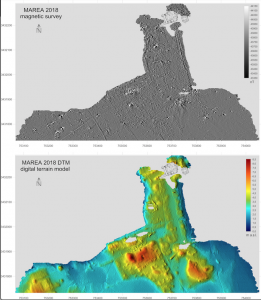 New geological research aims at reconstructing the coastline of Lake Mareotis and determining whether Marea was originally situated on an island, which would help to identify the crucial factors that influenced its urban development. It seems that the city was an important port. This is suggested by the presence of three quays, a large artificial harbour and large warehouses adjacent to these constructions. Unfortunately, we know very little about their chronology; for this reason we propose to excavate this structures in order to find out whether these buildings were associated with the large-scale export of locally produced wine in the Roman period. However, it is equally possible that the great harbour of Marea was established only in the Byzantine period (4th–7th c. CE) to cater the needs of Christian pilgrim traffic related to the shrine of St. Menas located 15 km south of Marea.