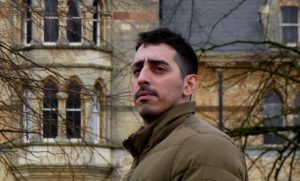 My DPhil project ‘Deep-Sea Archaeology in the Exclusive Economic Zone (EEZ) of Cyprus’ has demonstrated that it is possible to conduct research, and hence add new and unpublished information regarding Underwater Cultural Heritage (UCH) in the deep seas, by taking advantage of datasets (both geophysical and video-photography) produced by the oil and gas industry and other commercial sector companies.

For the past four years the study has been supported and closely monitored by the Department of Antiquities Cyprus (DoAC), to whom I am truly grateful, and has thus far contributed to the development a database containing over 1.7 TB and a (geo)database of 6 GB stored data. The developing (geo)database includes information on three-hundred scatters of materials and eight shipwreck sites, of which three wrecks were discovered during the course of oil and gas explorations and are first published in the context of this study. In total, six out of the eight shipwrecks are located in the EEZ of Cyprus, with the remaining two sites situated in the EEZs of Lebanon and Egypt. As well as these eight confirmed archaeological sites, the study has gathered information, mapped and archived, coordinates of twenty-seven side-scan-sonar (SSS) targets of ‘high archaeological potential’ and other sites of biological, geological, environmental and marine refuse importance.

With the help of Dr. Despina Pilides of the Department of Antiquities and the academic supervision of Dr Damian Robinson, University of Oxford, and through gathering, re-analysing, archiving, and requesting follow ups on reports and datasets for the purpose of this study, this thesis has provided a framework for communication between the Department of Antiquities Cyprus (DoAC) and offshore oil and gas contractors that has proven to be mutually beneficial. It has contributed towards the effective implementation of Article 18A of the ‘2014 (amended) Antiquities Law of Cyprus’: Any archaeology on the Continental Shelf and the Exclusive Economic Zone either known or unknown, belongs to the government, from now and on; and Article 18B-(1) of the same law: Licenced agencies, contractors or individuals operating in the Exclusive Economic Zone and on the Continental Shelf of Cyprus, are required to report to the Director of the Department of Antiquities Cyprus the discovery of any UCH sites and objects regardless of such discoveries were made intentionally or not, and for this manner they should submit geographical coordinates and additional information (ibid).

To ensure that the implementation of both framework has been effectively achieved, this project has developed the first monument list in an ArcGIS (geo)database that will enable the effective management of known sites in the deep waters of Cyprus. It is my position that through this (geo)database the DoAC can now have a more proactive role in consulting contractors/subcontractors operating in the EEZ regarding the whereabouts of deep sea UCH discoveries. It will help to protect these sites in situ from future commercial development projects such as oil and gas exploration and exploitation activities, pipeline and cable laying projects, and deep sea mining.

The study demonstrates that academic research in the subdiscipline of maritime archaeology can be effectively expanded beyond the accessible shallow waters of the Territorial Seas (TS) and into the inaccessible deep waters of the EEZ. The examination of side-scan-sonar (SSS), multibeam-bathymetry-echosounder (MBES) and backscatter and ROV video-photography datasets derives from datasets submitted by fourteen offshore oil and gas contractors who have operated in the deep-waters of Cyprus EEZ, and provide a rare insight into how the oil and gas industry conducts Environmental Baseline Survey (EBS) and Geohazard Investigations [or any other Supplementary Hydrographic Surveys] preceding the drilling of wells; how deep sea UCH is preserved by record when accidentally discovered and thereby visually surveyed during natural resource surveys (NRS); and what information can be deduced from the analysis of geophysical datasets. The analysis of these datasets has clearly highlighted the current deficiencies in the recording strategies of commercial companies undertaking NRS. They are simply not collected with an archaeological analysis in mind and as a result are often difficult to interpret. For instance, SSS, MBES and backscatter datasets are produced with clear industry objectives in mind, primarily for determining the most suitable location(s) for drilling. Inevitably, this means that these datasets are produced for the purpose of seabed characterisation and geohazard investigation and not for effective identification of UCH sites. Also, the analysis of them, demonstrates that these datasets are generated and then submitted to the DoAC at different frequencies, resolutions and formats. For ROV video-photography datasets the analysis has shown that ROVs conducting NRS usually operate on pre-programmed line-path-surveys and are stopped momentary to visually assess any sites of potential UCH importance or other prenoted geohazards. This survey methodology yields problematic results that considerably limit how much archaeological information can be deduced.

The end outcome of this study is the development of a robust set of guidelines aiming to ensure that oil and gas operators are conducting surveys and thereby generating data in a technologically and methodologically correct way, but without prolonging the operational activities of them with lengthy time-consuming tasks or putting an unacceptable financial burden on the licence holding company. Both survey levels and the associate by-standards were worked to specify the minimum prerequisites that different oil and gas contractors should consider implementing, with these being tailored specifically to the operational framework of deep-water oil and gas explorations. These guidelines are hoped to be the implemented in the ‘regulatory administrative acts of 2022’ of the ‘Antiquities Law of Cyprus’.

I have always been a keen swimmer. I was champion and record holder in the 200m breaststroke in Cyprus in 2008, and had the privilege of participating in competitions around the world with the National Team. I am a passionate, resilient, and positive person, with the ability to work hard to meet deadlines, whilst at the same time working well within teams to overcome obstacles and problems. I am an expert in Geographic Information Systems (GIS), and understand the importance working to produce data and to archive it for future reuse. I enjoy working in any environment, and have excellent communication skills enabling me to relate to people regardless of their socioeconomic and cultural background. I have undertaken fieldwork in five different countries in Europe, the Eastern Mediterranean and the Middle East, and have developed a good set of archaeological and survey skills both on-land and underwater. I am a keen recreational (rescue) diver with 6 years’ experience and over 600 logged dives.

As of 2021 I have signed a two years part-time contract with the Department of Antiquities Cyprus and I am responsible for providing consultation on issues related to the protection of UCH in all maritime zones of Cyprus.