The Harbour of Mi-wer: a Major Interface between Maritime and Terrestrial Roads - 2017 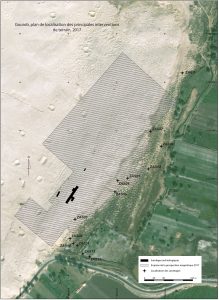 In Egyptology, even though the Nile constitutes the main travel route, it is only with recent geoarchaeological studies of the evolution of the Nile that interest in fluvial harbours has considerably grown. This theme is of primary importance in Egyptian maritime archaeology because it helps to reconstruct the landscape during Antiquity as a whole, and to show that fluvial harbours are often located at the crossroads of terrestrial routes leading to the sea, or directly nearby it. As fluvial Egyptian harbours in the specific Delta, Memphite and Theban areas are now beginning to be quite well known, we still have a lack of knowledge for other parts of Egypt. Therefore, a perfect case study for this topic is the fluvial harbour at the ancient town of Mi-wer (modern Gurob), located at the south entrance of the Fayyum area (120 km from modern Cairo) and mentioned in Late Bronze Age (i.e. New Kingdom: 1550-1069 BC) textual data, the town was mainly active between the reign of Thutmose III (1479-1425 BC) and Ramesses V (1147-1143 BC). The town was built in order to shelter an important palatial complex served by a harbour, known from the textual data. Connected with the presence of a royal Harem, this harbour could have been used as a mooring place for the royal family and its court, as a stop-over for the Fayyum strategic zone and as a transit point for military campaigns. Hence, its location is not surprising as it is situated near the Bahr Yussef (a canal derived from the Nile), enabling one to navigate to Memphis, or to reach the Libyan Desert and the caravan roads. Furthermore, Egyptian fluvial harbours are an emerging subject for Ancient Egypt and the Near East leading to the crucial question of networks and mobility. Since 2009, new fieldwork has been undertaken at the site of Gurob in order to locate the ancient channel and harbour.

The first mission from the Institut français d’archéologie orientale (IFAO) in Gurob was conducted in December 2017, supported by the Honor Frost Foundation. This first season was divided into the following (see also Fig.1):

1. Geoarchaeological study comprising drill-cores in order to locate the ancient course of the Bahr Yussuf and the ancient harbour.
2. Geophysical work in order to better understand the east part of the site, where the harbour might have been.
3. Excavations in the fort area.
4. Topographical work and mapping of the area.

1. GEOARCHAEOLOGICAL STUDY (Judith Bunbury, Ian Ostericher, Mostafa Elwakil)
The December 2017 campaign was mainly focused on the geomorphological study of the palaeolandcsapes surrounding the site of Gurob. The main goal was to continue the work started in 2010, in order to identify the ancient riverine and marshland favourable for the implementation of a port basin in this area. Indeed, previous research had suggested that there was a New Kingdom channel adjacent to the site and this work aimed to explore the location and size of the channel in more detail. From these observations, the team hoped to identify a candidate site for a harbor to serve the inhabitants of Gurob.

Former investigations suggested that there were three sets of buildings: the palace to the south, a “Fort” and tentatively identified ‘villas’ in the north. The “Fort” area is associated with kilns excavated by Anna Hodgkinson in 2010-2012 to the west and a ramp to the east that leads down to the level of the floodplain. 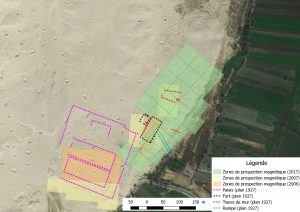 In the December 2017 season the team augered 13 new sites (ZAS 01 to ZAS 13) with a Eijkelkamp drill-core and confirmed that there was formerly a channel adjacent to the site, a hypothesis originally proposed by Ellie Hughes. The cores taken were around 10cm wide and up to 7m deep.

2. GEOPHYSICAL WORK (Lionel Darras)
The magnetic survey has been carried out with a gradiometer with caesium vapor G858 (Geometrics Inc), which has 2 magnetic sensors. It is an area of 5.5 ha which has been surveyed (200 x 400m) divided in different areas of 50m x 50m, by profiles spaced 1m apart, and measurements taken every 0.10m. The area has been established to the east, on the edge of the cultivated land, in connection with the research of possible harbour structures or buildings linked to it (Fig. 2). The raw data magnetic map was obtained and georeferenced.

3. EXCAVATIONS IN THE “FORT” AREA (Andrea Pillon, Marine Yoyotte)
As the area to the northeast of the palace is fundamental to the understanding of the access of site and urban stratigraphy, this first campaign focused on the precise relocation of the major building, the “fort”, which has not been the subject of any archaeological study since the clearing work in 1920 by G. Brunton and R. Engelbach. They describe the structure as an imposing rectangular building surrounded by a brick wall, the thickness of which they estimate at about 6 feet (about 1.80m), but for which they specify that they have only found the foundations. During the 2017 season, two sectors were therefore opened in order to find traces of the “north” and “east” walls of the building. The team also focused attention on the area of the southwest corner of the “fort”, with ground surveys and the opening of three trenches; this is indeed an important sector to understand the building’s position in relation to the palace.

4. TOPOGRAPHICAL WORK (Mohammed Gaber)
Intensive mapping and topographical work has been carried out in order to obtain a ground plan of the site (Fig. 3) 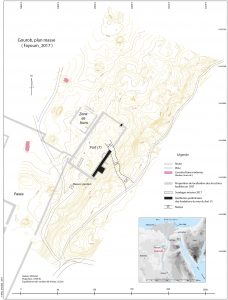 This first season of this multi-disciplinary project was really fruitful, below is a summary of the results;

1. GEOARCHAEOLOGICAL STUDY
The remains of the channel studied suggest that it was around 3m deep and around 60m wide flowing towards the north and contemporary with activity in the palace area. Rounding of clasts in the channel sands, which are relatively coarse, suggest that, at times, the channel had relatively rapid flow. However, to the north, sediments are rich in clay suggesting that, having rounded a bend in the tafla to the east of the palace, the stream power waned and the water was relatively sluggish.
Examination of the course of the Bahr Yussuf to the south suggests that a channel, albeit smaller, ran through the area from earlier times. Certainly, by the time of the palace, the channel had been formalized and deepened. Remains of the period of deepening are seen to the north where rounded transported grains of tafla characterize the bottom of the channel.

2. GEOPHYSICAL WORK
The map produced from the magnetic survey shows some anomaly alignments and magnetically homogeneous. It will be interesting to undertake excavation in these areas to the east of the site to see if these alignments are part of a harbour / quay structure.

2. ARCHAEOLOGICAL WORK
Soundings in the northern and eastern parts of the fort have made it possible to locate the respective walls of this building. In addition, the team were able to improve, in part, their understanding of the structure.

During this season, most of the aims and objectives were met. The multi-disciplinary team managed to;

1. Continue the geoarchaeological study at the bottom of the site in order to locate the harbour mentioned in the textual data and find the old location of the Bahr Yussef;
2. Start in parallel geophysical work in this area;
3. Start the excavation of the so-called “fort” as it seems to be connected with the antique harbour and the irrigation system set up at the entrance of the Fayyum since the Middle Kingdom (2055-1650 BC).
The only work they were not able to carry out was on the southern part of the site in the new concession at Beni Suef, as it was not possible to work on the two concessions at the same time. Instead the team plan to work there during the forthcoming seasons.

With this research on the ancient harbour of Mi-wer the first benefit is gaining a better understanding of the site and its environment. The research will allow the team to have a better grasp of the Fayyum area during the New Kingdom period (1550-1069 BC), as it was one of the main towns during this period. The geoarchaeological work will help to locate the ancient course of the river in this area during the Pharaonic Period, and to evaluate the movements of the Nile.
Over the long term, it will also help the team to reason on the implementation of a harbour at this specific location and its place in the broad network of Egyptian harbours. Hopefully, the team will be able to determine the main axis of circulation and the main roads leading either to the Mediterranean Sea or the Red Sea.

The following is proposed for further research:
– to continue the geophysical work and extend it further north, south and west.
– to carry on the geoarchaeological work by making new drill cores to the north and west of the work carried out in 2017 and by making excavation trenches in the area to the east of the site where the geophysical survey revealed numerous alignments of magnetic anomalies with an intensity from 5 to 10 nT.
– to continue archaeological work in the “fort” and mapping.