Until recently, the northern coastal strip of Lebanon had largely escaped the impact of mass urban sprawl and development. It therefore represents one of the only remaining coastal areas with relatively well-preserved archaeology. Unfortunately, this situation is rapidly changing, with new beach bars, green houses and industrial units being constructed along this coastline at an unprecedented rate. 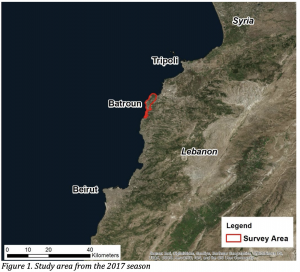 As part of ongoing initiatives in the region, the Kubba Coastal Survey (KCS) 2017 season sought to use remote sensing techniques, alongside field survey, to explore the rich maritime landscape of this region, building up an understanding of how activity, utilisation and perceptions of this area may have changed over time. The overall project focused on a number of research themes, exploring the extent and nature of settlement from the Palaeolithic to the early 20th century AD at key locations on the coast, as well as the interplay between maritime and terrestrial water resources and economic activities. We also sought to understand the modern disturbances and threats impacting the archaeology of this region and how possible strategies to mitigate these issues might be developed in the future.

Fieldwork in 2017 focused on an area stretching from Ras Cheqqa in the north to Madfoun in the south (see Figure 1). Work, in particular, focused on building a better spatial and chronological understanding of occupation and settlement in and around modern Batroun. The team identified and documented 98 archaeological sites/features and collected material from 108 transects, allowing us to build up a better understanding of occupation and activity along the coastline from the Neolithic until the Ottoman period, and pointing towards a number of sites of interest for future investigation.

Prior to ground survey in the region, remote sensing and cartographic analysis (using Google Earth, Corona Satellite Imagery, 1956 aerial photographs and 1:20,000 map data) had already pointed towards the existence of a number of potential archaeological sites and features. These included areas of un-surveyed salt pans, abandoned houses and buildings, and possible caves.

Both lithics and ceramics, were collected during the survey season and these have since been studied in order to explore diachronic patterns of use and habitation. Further analyses will be carried out in future years via a database and GIS system, hopefully revealing more subtle patterns of economic, domestic and industrial activity in this coastal region. 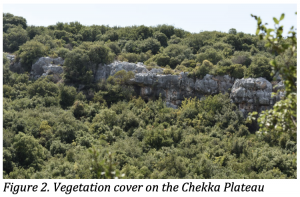 The material collected from the survey area mainly ranges in date from the Bronze Age through to the Late Ottoman period. Our work in 2017, however, revealed evidence for a number of potentially important clusters of earlier activity, including Neolithic sherds (dark faced burnished wares), from several coastal and upland sites. In particular, the Wadi Aarab, located on the Chekka Plateau seems to show signficant evidence for Neolithic activity, possibly associated with exploitation of the slopes of the Wadi Aarab and side wadi locations for settlement and subsistence activities. Unfortunately, we were somewhat hampered in our further investigations of this area due to the dense vegetation cover, especially along the slopes of the valleys (see Figure 2).

Another significant assemblage of material, this time dating to the Middle Bronze, Late Bronze and Iron Age, was retrived from an intensive survey carried out by the team within the modern settlement of Batroun (Figure 3). These assemblages included a number of diagnostic forms from the edges of Tell Batroun, pointing towards significant occupation and activity dating to these periods in this area, and corroborating textual references referring to this site. The pottery from Batroun would indicate that this is a long-lived tell site, with occupation and activity continuing through into the LBA/IA and later periods. A number of collections from this area, stand out, including those from inside the modern settlement and an area located near the harbour of Batroun which yielded Persian, Hellenistic and Roman diagnostics. In addition a small assemblage of Early Bronze Age material was found towards the southern edge of the modern settlement, and may indicate that occupation and activity on the tell of Batroun moved over time, with a possible focus of activity during earlier periods being concentrated to the south. 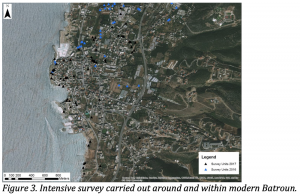 During 2017, a special focus was also given to the investigation of venacular architecture dating to the past 500 years within the area, and a range of different building forms, including whole villages in some cases, have been identified. The wealth of surviving medieval, Ottoman to mid-20th century architecture in this region is of major importance and is of interest for future studies and mapping projects in 2019 onwards. Survey in 2017, mapped a number of farmsteads, buildings and terrace systems bissecting the Chekka Plateau from east to west, including the Wadi Aarab and Wadi Chehia.

The survey also targeted a number of early-mid 20th century industrial or infrastructure sites, including parts of the northern coastal railway line and salt pans (Figure 4). These structures and areas provide us with an insight into the technologies and recent history of the coastal area. We hope that further investigation into the history of the railway line, in particular, will help us to understand more about how the installation of the line transformed the landscape of the coast during the mid-20th century, and how this impacted upon existing archaeological sites in the region. 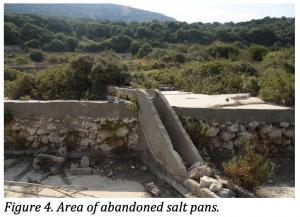 One of the principle aims of the of the KCS project was also to build up a record of the types of disturbances and threats affecting archaeological sites and features across the region. Based on methodologies designed by EAMENA (Endangered Archaeology in the Middle East & North Africa) project, the KCS has recorded a range of different disturbance causes (e.g. modern occupation, construction, ploughing, clearance etc.) and affects (e.g. alteration of terain, erosion, collapse/structural damage) to archaeological features.

The most common recorded disturbances were vegetation/crops/trees, causing collapse/structural damage. Construction is also major disturbance factor, and has often destroyed sites so that they can no longer be be assessed. Many of the archaeological features surveyed by the project are structures, like buildings, which often show collapse or structural damage, caused by neglect. A third common disturbance effect is erosion, which is partly caused by neglect, but otherwise has natural causes like water or wind action. Close to modern roads and within towns an additional cause of erosion can be pollution.

The 2017 season, generously funded by the HFF, was hugely successful and enabled the project to identify a number of key locations along the coast for future investigation. We also now have a much better overall understanding of the nature of settlement and activity at sites along this area of coastline. In particular, our intensive survey, in and around modern Batroun, has confirmed that occupation at this site ranges in date from at least the Early Bronze Age, through to the modern settlement. Perhaps the most significant findings of the season were in relation to the identification of new, previously un-investigated, sites (see Figure 5), some of which may have evidence for occupation and activity from the Neolithic, right through to the Otttoman period. As a team, we are particularly excited about these discoveries and hope to return to Lebanon in 2019 for further research and fieldwork.

1. Aims and Objectives
Fieldwork in 2019 aimed to complete the coastal survey of the area surrounding the sites of Kubba, Kfarabida and Batroun, first initiated in 2016. The survey, as in previous years, focused on an area stretching from Ras Cheqqa in the north to Madfoun in the south (Figure 1) and was carried out over a period of 4 weeks (15th June-15th July). Work in 2019 predominantly focused on building a better spatial and chronological understanding of occupation and settlement in the northern half of the survey area (see Figure 2, black triangles mark areas surveyed in 2019). During the four week survey, the team identified and documented 125 archaeological sites/features and collected material from 106 transects/ grab spots (see Figure 2).

In addition to the coastal land survey, this year allowed us to complete initial underwater survey work at Mazraat Hannouch, directed by Dr Lucy Seeman. This preliminary underwater survey highlights the necessity of further work and, along with the land survey and test pits carried out, demonstrates both the cultural and natural importance of this area.

2. Methodology
Survey in the KCS region was carried out using tablets with enabled GPS and QField, in addition to several Garmin handheld GPS and Nikon cameras. The GPS systems are accurate to within c. 2m and features were mapped using the WGS 84
co-ordinate system. In addition, a differential Leica GPS, with centimeter accuracy, was used for mapping out discrete features. Following the 2019 season, further analysis of settlement and activity patterns took place via a QGIS
geospatial database. The underwater team carried out survey across an area of c. 2.3km2. The survey area was divided into 245 squares, of 100 × 100 metres. The squares were georeferenced, and oriented on a north-south axis to facilitate diver navigation and orientation underwater. They were numbered from East to West numerically on the X (from 1 to 17), and from North to South alphabetically on the Y (from A to U). The survey area roughly extended some 2.1 km from north to South, 1.6km from east to west on its northern limit, and some 720 meters from east to west on its southern limit.

The survey season this year was extremely successful. Although a full analysis of our field results are not yet complete, our preliminary work has enabled us to gain a much fuller understanding of settlement and activity along the coastline, particularly in the northern half of the survey area. Both lithics and ceramics were collected during the survey season and these have since been preliminarily spotdated and photographed. The distribution of these finds across the landscape is indicative of diachronic patterns of use and habitation. Future detailed study of these collections and analyses via the database and GIS system will reveal more subtle patterns of economic, domestic and industrial activity in this coastal region.

The survey recovered material ranging in date from the Neolithic to the 20th century CE. Substantial lithic assemblages (Figure 3) were documented, along with Early Bronze Age through to Post-Antique Pottery (Figure 4). The underwater survey also recorded a range of material, including stone and metal anchors, pottery sherds and masonry blocks (Figure 5). As expected, substantial assemblages of Classical material were collected during our intensive survey and many of these were found from transects carried out directly along the coastline.

In addition, survey this year revealed evidence for several previously undocumented sites, including an interesting hilltop settlement (see Figure 6), likely to date to the Classical-Late Antique period. Further study of this material will hopefully allow us to refine the dating for this area of occupation and activity.

Work in 2019 also helped us to refine our understanding and dating of several previously documented archaeological structures and sites (e.g. churches and ruined villages). In addition, transects along the northern coastline revealed large assemblages of classical material (Figure 7), as well as a number of important productive installations (Figure 8). Although some of these may have been displaced from their original location, the project also documented a number of possible structures, close to the shore. Many of these had been disturbed by recent building activities, however, the evidence does point towards the possible use of the foreshore for a range of different productive or industrial activities during the Classical and Post-Classical periods. At the very southern edge of this zone, beyond the present shoreline, an area of quarrying was also documented (Figure 9). Along with the results of the underwater survey, these findings point towards the importance of further investigations in this area.

There is still more to learn about this region of Northern Lebanon. Based on our work this year, however, we have managed to gain a much deeper understanding of at least one sector of this coastline. The evidence from 2019 points towards the use of this region for a variety of activities, from quarrying and production to habitation and religious worship, ranging in date from at least the Neolithic to the Post-Antique periods. To have such a coastal archaeological assemblage, dating from a variety of periods, preserved in one area is truly remarkable.