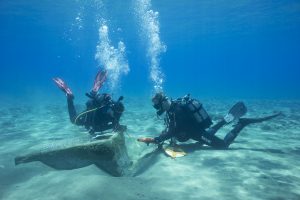 Just off the south-central coast of Maroni-Tsaroukkas, Cyprus, is an anchorage with stone anchors, stone blocks, and ceramics that dates to the Late Bronze Age (LBA: approximately 1700-1100 BCE). While the anchorage was surveyed in the 1990s (Manning et al, 2002) spatial resolution of the anchors and other material remains was highly problematic due to the limited, existing technology. Recent developments in archaeological survey techniques permitted a comprehensive survey that can quickly and accurately spatially reference and document visible material. In June 2017, a team of three researchers and three graduate students conducted an underwater survey of the area using recent technological advances to fully map and document the visible material remains over the eastern portion of the site.

Methodology
During the field season, the team surveyed half of the anchorage in an area approximately 200 m out to sea by 100 m along the coastline. They established a grid system based on known terrestrial datum points that have been geo-referenced. These known points allowed them to connect the maritime survey with the terrestrial excavations and survey in the region at Maroni-Tsaroukkas and Maroni-Vournes. In this area, they created quadrants for survey that were 25 m x 50 m in size, marking out the quadrants with stakes at the corners with line strung between the stakes to help orient divers. Two different survey methods were implemented:
1. Traditional underwater survey in which divers swam in transects and recorded remains with a measuring tape in a known grid system
2. A camera system attached to an underwater scooter that took photographs of the seabed to be used in photogrammetry.
In the traditional diver survey method, two or three divers swam side by side along each transect in a quadrant to identify cultural material. Stone anchors and blocks were tagged and measured to the geo-referenced datum points that marked the boundaries of the quadrants. The stone blocks and anchors were recorded with measuring tapes as well as photogrammetry. Any ceramic remains were sketched and recorded with measuring tapes. Alongside this the team used photogrammetry to document the seabed using a custom camera system attached to an underwater scooter. The camera in underwater housing was connected to a microcomputer that recorded metadata for each photograph in the transect, such as the spatial positioning of the unit in the water and overall GPS coordinates. The scooter was operated in transects along the grid system set out for the traditional diver survey to ensure that comparisons can be made between the two methods and ensure comprehensive coverage. Using these two methods, the team recorded what is estimated to be the eastern half of the anchorage. 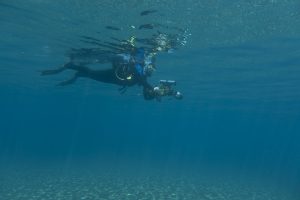 Within the area surveyed the team recorded stone blocks, stone anchors, and ceramics. A summary of the finds is presented below:
Ceramics
A total of 34 sherds were recorded in ten of the sixteen quadrants, preliminary analysis shows that some dated to the Late Bronze Age (ca. 1700- 1100 BCE), with examples of hand-moulded rims of transport vessels in the central region. The sherds in the nearshore region were highly abraded late Roman amphora body sherds. This region had the largest concentration of ceramics remains but did not appear to be in situ. Ceramic remains were found near the anchors, and in one example a LBA sherd was found next to a single-hole anchor.
Anchors
In nine out of the sixteen quadrants, 16 anchors were recorded: two anchors had three-holes and fourteen had single-holes. One of the three-hole stone anchors had been broken so that only two-holes remained. Most of the anchors appear to occupy an area that was between 50 m and 150 m and are concentrated further to the west. The smallest anchor was approximately 35 cm in length and the largest was approximately 80 cm in length.
Stone blocks
Seven stone blocks were recorded in five of the quadrants and were clustered in the central region of the area. The blocks appear to be calcinarate stone and range in size from 34 cm in length to 133 cm in length, with square faces and evidence that they had been worked. Two of the largest blocks were found in close proximity to each other. One of the larger blocks did not have sides of equal measure but tapered.

This survey addressed the four primary objectives originally set out for the project:

The team were able to identify the easterly and southerly extent of the anchorage, situating it within 200m of the current coastline. These remains were recorded with both measuring tapes and photogrammetry. Preliminary processing of the photographs acquired using the camera-system indicates that the resolution is of high enough quality to identify stone anchors and blocks from the images. Finally, three students participated in the survey and were trained in these different survey techniques. 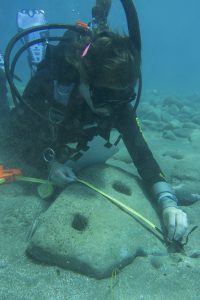 This project has advanced knowledge both in survey methods and in our understanding of the anchorage at Maroni-Tsaroukkas. The use of a computer-controlled camera-system affixed to a dive scooter is a new approach to surveying a large area comprehensively and accurately. It also highlights the potential errors in mapping a large site using traditional methodologies, as the measuring tapes also created inaccuracies over long distances. A careful study of the large stone blocks and the anchors informs us about the use of the anchorage, as many of the anchors were small, weighing approximately 25-80 kg. As these anchors are much lighter than those associated with the Late Bronze Age Uluburun shipwreck, this indicates that multiple anchors may have been used in the anchoring process at Tsaroukkas.
The team plan to return to the site in June 2018 to re-survey this anchorage with the camera-system and compare visible patterns across multiple seasons. They also plan to survey the western area of the anchorage by using traditional diver survey and the custom-developed camera system attached to a ROV. With data acquired over two seasons, they aim to develop a comprehensive site plan from which to answer questions of how the anchorage was used. Additional work will also focus on the provenance of the anchors.