Under the Mediterranean II, Malta 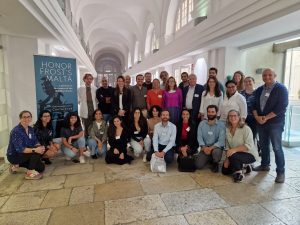 Honor Frost’s connection to Malta can be traced back to 1967 and the Mellieħa Bay project. Ms Frost’s subsequent publication ‘The Mortar Wreck in Mellieħa’, can be considered as the beginning of underwater cultural heritage activities in Malta, as well as the beginning of a long association between Ms Frost and Malta, where she kept a house and considered it a second home. This connection was also celebrated through a small ‘Honor Frost in Malta’ exhibition at the Malta Maritime Museum, which included her notes and illustrations from the Mellieħa Bay excavation.

Below is a list of the Under the Mediterranean Bursary Recipients

“The Conference was a spectacular event with more than 60 talks and around 40 posters, presenting various topics ranging from the impressive growth of the photogrammetry techniques and their application on documenting and interpreting UCH, maritime landscapes, new discoveries, and sustainable management approaches of UCH. All the scholars were generous and genuine to present and share their knowledge, which created an outstanding atmosphere with a remarkable podium” (Nada Nofal)

“most importantly, I was inspired! The book by Honor Frost, the inclusive projects, the beautiful speeches, the community out reach and museum activities… I got a lot of ideas, and hoping I would be more involved in such projects in my career.” (Vera Noon)

“It was an ideal space for intellectual conversation and learning about the most recent projects around the Mediterranean.” (Elissa Nader)