I was awarded my MA degree from the University of Southampton in October 2019. This I could not have achieved without the Honor Frost Foundation that provided me with the opportunity and support to travel to England and study in one of the most prestigious centres of maritime archaeology. There, I was able to develop my academic and practical skills in the field of maritime archaeology.

The Honor Frost Foundation has also allowed me to participate in workshops, field surveys and excavations in Lebanon during the past two years which effectively launched my career in maritime archaeology.

Entitled ‘Ports of the Levant: Decline or Change During Late Antiquity’, my masters thesis concentrated on the ports of the eastern Mediterranean during the regions transition from Byzantine rule to the Islamic one in Late Antiquity. The patchiness of data corresponding to the sites in the area of focus, and the lack of comparative studies has limited our ability to properly assess the administrative, cultural and economic situation of the region during this period. To remedy that, the available literature and data on the sites and the coast of the Levant was collated in an effort to distinguish a pattern that might shed light on the region’s maritime landscape and activities. By identifying the ports and harbours along the Levantine coast which would have been in use at this time, and examining the archaeological record in the respective historical context, the thesis’s aim was to assess the extent to which they exhibit continuity or change.

This was followed by an assessment of the implications of continuity or change on our understanding of the transition from Late-Antique to Early-Medieval from a port-based perspective. This approach allowed a more accurate interpretation of the maritime landscape and its exploitation during a much disregarded transitional period, breaking down previous artificial divisions based on eras.

Figure 1: Map of the Levantine coast featuring the sites of interest.

Figure 2: Aerial view of Tyre, including the original island towards the left, the continental coast to the right and the tombolo that links them together in the middle (photograph: Poidebard archives at the Univeriste Saint Joseph). 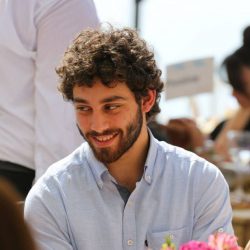