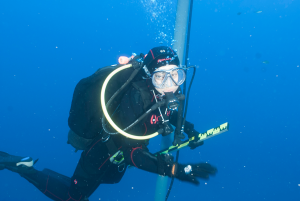 I completed my undergraduate studies in archaeology in 2006, at the Aristotle University of Thessaloniki, Greece (Department of History and Archaeology, Faculty of Philosophy). I then continued my studies at the University College London (2007) where I acquired a Masters degree on Management of Archaeological Sites.

Between the years 2008 – 2012 I worked with the Thetis Foundation for the Protection of Underwater Cultural as Executive Director, having started in parallel my PhD at the University of Cyprus, in 2010. During the academic year 2013-2014 I worked as a Research Assistant at the Maritime Archaeological Research Laboratory (MARELab) of the University of Cyprus. Since 2009, I have participated in several underwater archaeological projects in Cyprus (Mazotos shipwreck project, Nissia shipwreck Project, and Xylophagou Anchorage Project).

I earned my doctoral degree from the University of Cyprus in May 2019. This was made possible with the support of the Honor Frost Foundation; in 2016, I was granted a PhD Student Grant for the completion of my studies, which enabled me to focus exclusively on writing my thesis. What is more, sponsored by the HFF throughout my PhD studies, I was had the opportunity to attend conferences and participate in archaeological projects, which enhanced my professional development in the field of maritime archaeology.

My doctoral thesis, entitled “Ancient shipwreck sites in Cyprus: itineraries in the contemporary world”, is an attempt to bring to the forefront alternative engagements and negotiations developed around ancient shipwrecks in Cyprus, in order to acquire a spherical understanding of their significance and position in contemporary society.

The study focused on the three sites that have been or are being excavated on the island: the Keryneia, the Mazotos, and the Nissia shipwrecks. Aiming to contribute to the understanding of the qualities of ancient shipwrecks within contemporary society, both their professional and non-professional aspects were examined. The socio-political context of archaeological practice in Cyprus and the narratives produced around ancient shipwrecks were explored, as a means to identify their official position within present-day society. At the same time, the study went beyond the established perceptions produced by the official archaeological circles around ancient shipwrecks, to investigate alternative meanings and negotiations  developed around them today. On this ground, an ethnographic survey was undertaken among  the distinct social groups interacting with the shipwrecks following their discovery: local communities as well as fishing and diving communities active in the area of their location

Through the data collected the impact of official archaeological practice on the island was examined, interwoven with the unfolding biography of the shipwrecks following their discovery.  The results of the ethnographic survey revealed a multi-layered understanding of ancient shipwrecks, which goes beyond the established professionalised conceptions. I argue that rather than being static objects with an inherent value, ancient shipwrecks gather around them multiple and constantly changeable meanings and negotiations, based on the distinct relationships developed around them by the non-professional communities. As such, ancient shipwrecks set the ground for negotiating distinct personal, local, professional, and economic identities.

The multiplicity of subjects examined in this thesis ultimately point to one direction:  the need for a maritime turn in the approach of the distinct community groups associated with ancient shipwrecks. As the sea is the medium through which ancient shipwrecks are perceived, a shift to the current human-sea relationship opens up new experiential and interpretative dimensions of the sites within contemporary society.