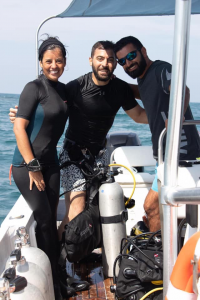 Naseem Raad is a Lebanese archaeologist who completed his MA and PhD at the University of Southampton through scholarships from the Honor Frost Foundation. Naseem researches economic history through a critical examination of maritime trade and transportation with a particular focus on the Roman period. In his PhD, he provided a holistic characterisation of the Roman port of Beirut and assessed maritime distribution networks within which the city was involved.

Naseem’s PhD dissertation, titled ‘Roman Beirut: An Analysis of Economic Systems and Maritime Commercial Networks’, presents a case study to better characterise a port system socio-politically and economically. In this work, Naseem breaks down the supply chain of olive oil and wine in the Roman colony of Beirut, and traces the products’ distribution throughout the eastern Mediterranean. This is done methodically through assessing the source of the product at vineyards and olive groves in the hinterland of the colony, outlining processing centers where wine and oil were manufactured, recreating terrestrial routes to the port city, characterising the packaging and loading of the products as cargo, and tracing their subsequent transportation to other Roman ports in the eastern Mediterranean. The methodology used in this work is unique and challenges previous socio-economic approaches and literature, and can also be applied to other port cities. The ultimate goal is to shed light on the development of economic rationale through a critical comparison of economies across time and space.

During his time at Southampton, Naseem attended numerous conferences, including ‘Under the Mediterranean’ and ‘Tyre, Sidon and Byblos: Three Global harbours of the Ancient World’. He taught a session on Roman economics as part of the MA course ‘Mediterranean Seafaring’ at the University of Southampton. Naseem is one of the founders of the MAGS conference and, in collaboration with colleagues from Oxford and Southampton, organised the event in 2018 and 2019. He has participated in numerous projects in Lebanon, including Kharayeb, Batroun, and Dammour, and contributed to the preliminary reports. He also assisted the NAS in the field school conducted in Sidon.

Naseem served as the primary editor of the BAR volume ‘Ships, Boats, Ports, Trade, and War in the Mediterranean and Beyond: Proceedings of the Maritime Archaeology Graduate Symposium 2018’. His publications can be found at https://aub-lb.academia.edu/NaseemRaad.

In this way, Naseem has been furthering the goal of the HFF in capacity building and promoting new research related to maritime archaeology in Lebanon. His research proposes a methodological framework that can be applied to other maritime sites throughout the eastern Mediterranean, allowing for a more consistent approach in the study of coastal settlements and maritime trade. His publications and fieldwork are all focused on Lebanese sites and themes, and shedding light on previously understudied areas.

Naseem is currently the Academic Coordinator of the HFF-funded Marine Sciences and Culture program at the American University of Beirut. He lectures for two MSCU courses (MSCU 201 and MSCU 204), and manages all activities related to the development of the program generally.