The Mazotos Shipwreck is the remains of a commercial ship dated to the late classical period. It was located in the sea area of Mazotos, at 45 metres below sea level. It is the first shipwreck of that period located in the South East Mediterranean carrying Chian amphorae, at a depth where divers can work. This is of noteworthy scientific significance as its research could shed light on issues concerning the sea routes and trade relations between the peoples of the Aegean and the S.E Mediterranean during this period.

Research at the Mazotos Shipwreck began in 2007. It is conducted by MARELab under the direction of Dr Stella Demesticha, in collaboration with THETIS Foundation and the Department of Antiquities of Cyprus. The Foundation has also provided funding for the project since 2013, reports relating to this work and further information can be found below. 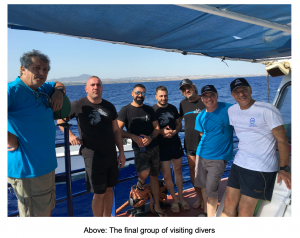 In order to achieve Key Area D of the MoU with the University of Cyprus Archaeological Research Unit, the “promotion of the Maritime Archaeology Research Laboratory of the UCy ARU as an eastern Mediterranean regional training centre of excellence in underwater archaeology”, the NAS was asked by the MARE Lab ARU to develop and deliver a variety of outreach and promotional activities associated with their planned investigation of the Mazotos wreck in 2019.

Two project activities were delivered in English and in Greek. The project activities included:
1. Pre-arranged visits over 4 days to the excavation of the Mazotos wreck for local scuba divers to meet the project team and to dive the wreck under supervision.
2. An NAS Introduction to Underwater Archaeology course delivered in the village of Mazotos. The village of Mazotos hosted the Mazotos shipwreck excavation team, so it seemed appropriate to host the course in Mazotos.

The “Reaching Out” project activity was delivered over two weeks (12 days in total including travel days), from the 3rd October until the 14th October 2019. As a result of the project, twenty eight divers visited the Mazotos wreck on 4 days during the period from the 5th October until the 12th October 2019. A practice day was undertaken on the 4th October to test the timing and logistics of the planned visits with the chartered boat. The Introduction to Underwater Archaeology course took place in Mazotos on the Sunday 13th October 2019. Unfortunately, only two people took up the offer of the free course. 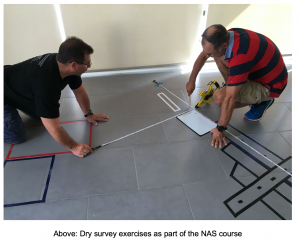 The opening up the Mazotos Shipwreck site to the public, although demanding and challenging, proved to be an effective way to bring the site closer to the public. This was strengthened by the fact that the visits took place during the field project. Not only did the visitors have the chance to see the site, but they also saw the wreck within its contemporary context, with people working on the site, while a range of procedures were taking place. This is what evaluated their experience as something more important than just another dive. It contributed to the development of a connection with the site itself and its people, minimizing the existing gap between archaeologists and the public. Moreover, this experience has contributed to a deeper understanding and appreciation of the work undertaken which, in the long term, could play a significant role in the protection of underwater archaeological sites.

More information is also available on the NAS website