Apollonia on my Mind - The memoir of a paraplegic ocean scientist 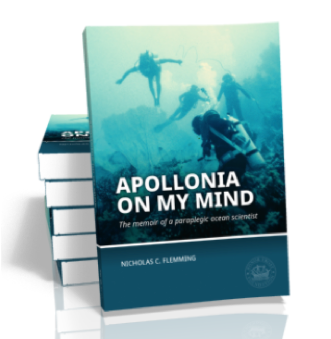 The new book by ocean scientist Dr. Nic Flemming, is now available to purchase or read online for free! This book is part of the Honor Frost Foundation General Publication series. You can also watch a film on Dr Flemming’s pioneering expeditions to Apollonia, Libya. This original footage from the first expedition to Apollonia has recently been restored and contains some of the only existing documentation of the ruins as they stood in 1958.

The ocean conceals secrets, ancient, modern, and future. Nic Flemming’s memoir recounts the life of a pioneer in ocean science. Each chapter describes a thread that structured his work: underwater cities, submerged Ice Age caverns dripping with stalactites, the limits to ocean exploitation, ocean climate change, prehistoric settlements on the continental shelf, ocean law, and safe scientific diving. Flemming is paralysed from the chest down and has used a wheelchair for the past 52 years; one chapter assesses how he has continued to work in rough conditions and at sea, visiting 60 countries since his accident.

Flemming’s early experience with the Royal Marines Special Boat Service provided the foundation for a scientific research career under water. Intrigued by a report of a sunken city seen from a helicopter, he set out to map the submerged Greek city at Apollonia, near Benghazi, in 1958-59, as a Cambridge undergraduate. Doctoral research on the cause of submergence and uplift of hundreds of coastal Mediterranean ruins was followed by adventures in now-submerged caves from the Ice Ages when the sea level was lower.

In 1965, as industry awakened to the potential of seabed exploitation, Flemming journeyed around the world to assess marine technology and forecast future developments for UK industries. This led to participation in the UN Committee on the Law of the Sea and in the design of a Global Ocean Observing System.

This is a multi-disciplinary adventure story that argues that different skills and fields can interact creatively with surprising results. It will be enjoyed by all those interested in the development of underwater archaeology, climate science, and ocean exploration