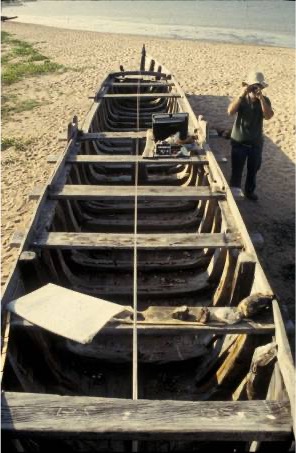 It is with deep sadness that we share the news of the passing of Professor Seán McGrail on June 28th, 2021. He died peacefully at home surrounded by his family, at the age of 93. Seán, a master mariner, made major contributions to the field of maritime archaeology. Following an accomplished career in the Royal Navy as a pilot in the Fleet Air Arm, Seán embarked on a second career in archaeology at the National Maritime Museum (NMM) Greenwich, as Chief Archaeologist and Director of the Archaeological Research Centre (1976-1986). In 1986 he became Professor of Maritime Archaeology at the University of Oxford, until he ‘retired’ in 1993. He relocated as Visiting Professor to the University of Southampton Centre for Maritime Archaeology, in support of the newly formed Masters programme. He also held visiting professorships at the National Museum Centre for Maritime Archaeology at Roskilde in Denmark (1994) and at the University of Haifa in Israel (1995).

Seán was known for his passion for boats, particularly log boats, the subject of his doctoral research (University College London, 1978). He had a unwavering commitment to publication, with a record that exceeded what most academics achieve in a single career, the most notable being his 2001 opus Boats of the World (OUP). He was involved in a range of fieldwork, experimental, ethnographic and scholarly projects, including being a key figure in the organisation and publication of the very first International Symposium on Boat and Ship Archaeology (ISBSA) held at the NMM in 1976. He was occasionally spotted as the trierarch aboard the trireme reconstruction Olympias. He worked alongside his good friend and colleague Professor Ole Crumlin-Pedersen, on the publication of a number of articles and experimental archaeology projects. As part of his pioneering work in maritime ethnography, he faithfully documented a range of traditional working boats – many of which no longer exist – on beaches across India, recording their construction and use. As a rigorous academic in pursuit of quantifiable data, Seán would leave no page unturned in his quest for truth and accuracy.

Seán’s archives are held at the University of Southampton, Maritime Archaeological Special Collection and thus aspects of his thinking processes are preserved. But the loss of his immense knowledge, as well as his dry wit and passion for the subject, represent a huge gap for us all, on many levels. Our sympathies extend to his wife Annie and their children for their bereavement and to the entire maritime archaeological community.