From 1984 until 1999, the French archaeological mission at Kition (modern Larnaka, Cyprus) conducted extensive excavations in the ancient harbor area of the city, at the site of Bamboula, under the supervision of Marguerite Yon. Now located at some distance from the present-day coastline, the site accommodated during the Classical period (4th century BC) a military arsenal, characterized by a shipshed building located to the South of a naturally closed harbor basin. The fieldwork lasted for 15 years and established the building’s interpretation and its dating. Made of a series of long and narrow slipways, the roofed building was designed to house warships of the trireme type. However, due to the presence of tennis courts, which hampered excavations to the East and North-East of the site, two questions remained pending:

– The possible extension of the building towards the East, beyond the 6 excavated ramps, since no limit was found;
– The precise limits of the basin towards the North of the site.

In 2017, work for the final publication was resumed, in parallel with renewed efforts to obtain the relocation of the tennis courts. Thanks to the collaboration of the Department of Antiquities, the relocation of the tennis courts was achieved in 2020. Due to the pandemic crisis, the completion of the harbor excavation, which was originally planned to last for two successive campaigns, took place in October 2021, with the support of the HFF.
Two main questions oriented the research: 1) the limits and shape of the harbor basin; 2) the possible extension of the shipsheds towards the East.
Two trenches in the northern and eastern parts of the site (under the former tennis courts) proved that the basin extended over the whole area of the modern archaeological site. The “closed harbor” mentioned by Strabo was a naturally protected basin, which was accessed by the North, and not by the East, and was linked to the Kathari bay, further North. Coming from the North, triremes could be handled more easily than previously thought, in order to be hauled stern first on the ramps of the shipsheds.
Excavation to the East of the shipsheds building proved the existence of at least one further ramp (fig. 1), evidenced by a pillar base. This base is made of a huge limestone block resting on a strong massif of blocks (fig. 2). To the East extends a sandstone wall, which connects with another base-like structure, probably functioning as part of a closing wall of the building. Further East, we excavated only debris from modern fill, down to the water-table.
We can thus reconstruct a building comprised of 7 parallel ramps, open on the harbor basin to the North, delimited by terracing walls on its western and southern sides and by a wall made of a succession of bases supporting pillars on its eastern side (fig. 3). These new results have been included in the final publication, which has appeared in April 2022. 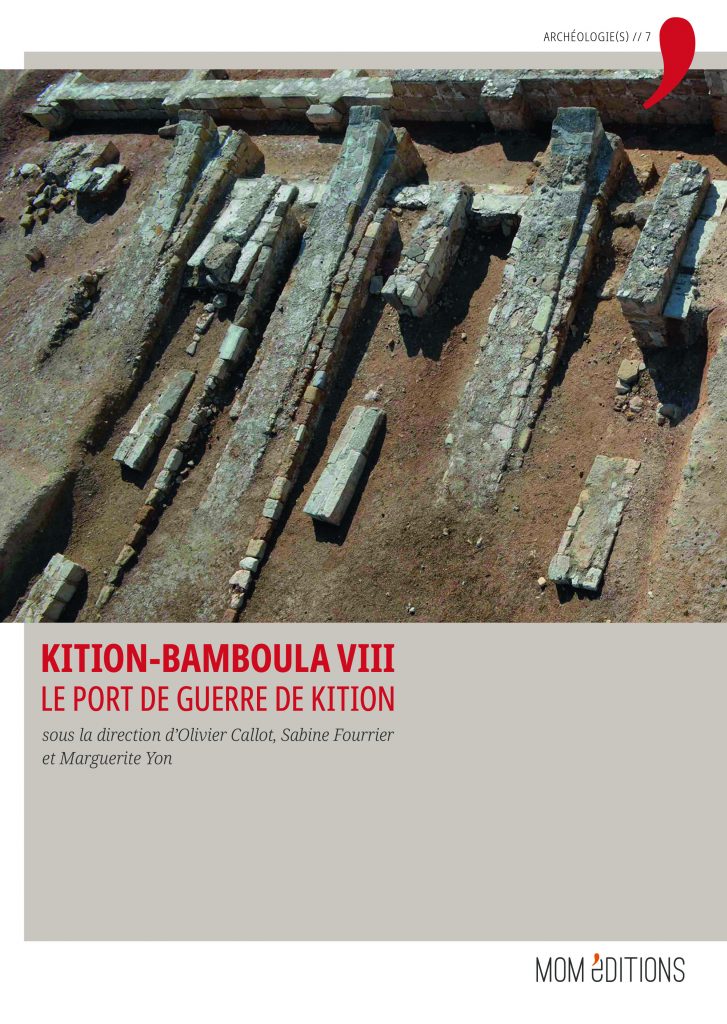 The project was the final publication of the excavations led by the French mission at Kition on the military harbor of the Classical period. From 1984 to 1999, the French archaeological mission of Kition, under the supervision of M. Yon, conducted extensive excavations to the north of the Bamboula sanctuary. These excavations revealed the remains of shipsheds of the Classical period, among the best preserved in the Mediterranean, which opened to the north on a closed harbor basin. This book offers a detailed and cross-cutting study of this outstanding discovery: the building is contextualized in its paleo-environment (both at the local and regional levels), the chronology of its different phases is established, its architecture is carefully described and reconstructed for the missing parts (superstructure). Finally, we assess the importance of this military harbor for the history of Kition, Cyprus and the Eastern Mediterranean, at the time of the Classical kingdom (4th century BC) and at the beginning of the Hellenistic period. The volume is completed by a study of the ceramics from the Roman period discovered in the filling of the basin.
The volume: Olivier Callot, Sabine Fourrier, Marguerite Yon, dir., Kition-Bamboula VIII. Le port de guerre de Kition, was published in April 2022 in the series Kition-Bamboula (Archéologie(s) 7, MOM Éditions, Lyon).

The book is available as a hard copy as well as in open access on the OpenEdition Books webportal.

All excavation data pertaining to the Kition-Bamboula harbor excavations and the preparation of the publication are available in open access on the webportal. All documents are stored on the Nakala service of the national repository Huma-Num (with mandatory metadata). Hyperlinks help navigating from the digital book to the excavation archives and vice-versa.