Byblos & the Sea is a multidisciplinary research project on the coastal and maritime area of Byblos co-directed by Martine Francis (affiliated researcher at the Collège de France) and Nicolas Grimal (Prof. at the Collège de France), in collaboration with the Directorate General of Antiquities of Lebanon. It is a continuation of a long term research program on coastal and maritime Byblos, started by Honor Frost in the 1960s and resumed after the Lebanese civil war, since 1998.

Since 2011, the research program Byblos & the Sea has conducted a series of multi-disciplinary field investigations in collaboration with local and foreign specialists. The main objectives of this research program were to understand the maritime approaches to Byblos and locate eventually the much attested Bronze Age harbour of the city which was responsible for its economic growth during Antiquity.

The latest phase of work is on Stone Anchors and Anchor Structure study, to begin in 2022. This will include an exhaustive comparative stone anchor study to complete the comprehensive catalogue started by Honor Frost in the 1960s (Fig 1a and 1b). The study will also include anchors newly found by Byblos & the Sea’s fieldwork (Fig 1c). The main objectives are to determine the full corpus of anchors found on the Byblos archaeological site and environs and define a typology and their sizes used on ships for the maritime trade network in Byblos with the eastern Mediterranean during the Bronze Ages.

Alongside this the team plan to conduct a study on the so-called “Proto-lighthouse” anchor structure, to complete an architectural analysis of the structure, interpreted by Honor Frost as an early type of lighthouse, overlooking the southern commercial harbour of ancient Byblos it may have guided ships from Egyptian approaches into the city. “Fire by night and smoke by day rising from its roof would have situated the headland for ships coming from the south and also helped them to find the place where they should drop their anchors” (2004). Frost compared it to the Ugaritic Ba’al Temple monument since both yielded a series of “votive” anchors; in Byblos pierced stone anchors are forming the first step of a flight that seems to have led up to the roof of this structure, ̶ a tower temple-type monument (Fig 2). The aim of our architectural study is to determine the function of this anchor structure. 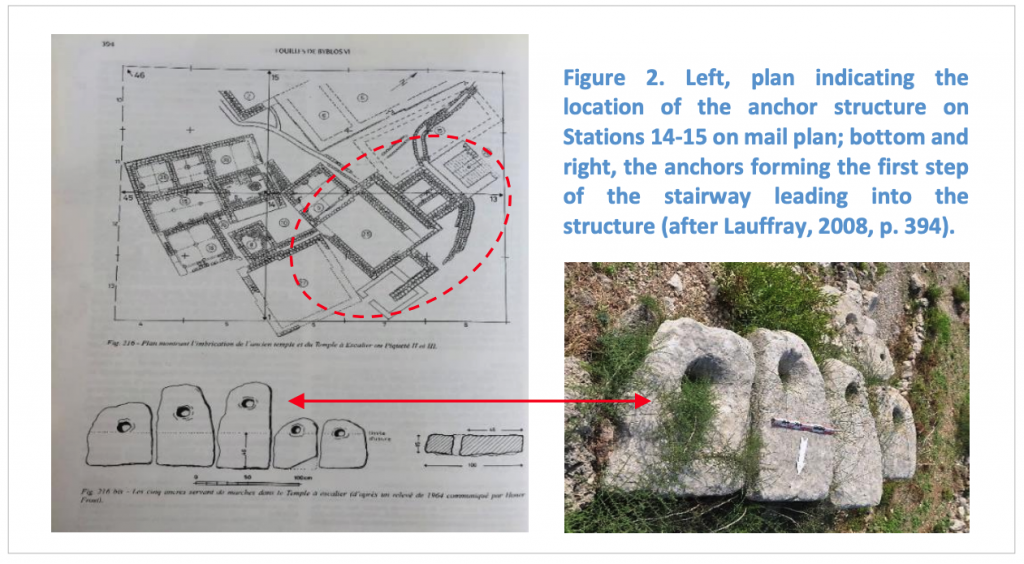 Click on the links below to read the project reports…