HFF Lebanon and the Department of Antiquities of Lebanon (DGA) 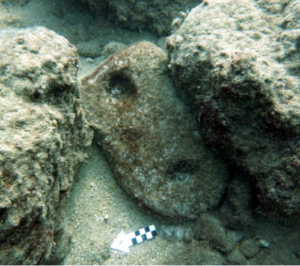 The Damour Maritime Survey (DMS) is an underwater, terrestrial and remote sensing survey and documentation initiative undertaken by the Honor Frost Foundation and the Lebanese Department of Antiquities (DGA) in October 2018. Survey in this area was deemed a priority owing to the imminent development of a coastal resort in the “Damour Bay” area immediately to the west of the town of Damour; currently zoned as rural land and thus afforded a certain degree of protection, the coastal area is under pressure from developers. The survey was undertaken over a period of three and a half weeks from October 1 to 26 2018.

The Damour Maritime Survey (DMS) has been a groundbreaking project on several levels. In methodological terms, the integrated underwater, coastal, remote sensing and geoarchaeological approach has proven highly successful and rewarding despite the substantial destruction / absence of the underwater archaeological deposits. The integration of local and international team members, combining specialists from seven different countries, further contributed to its success. It is highly recommended that any future projects in this dynamic landscape adopt a similar methodology.

The fieldwork team contained a combination of Lebanese and international colleagues with different specialisms, which enabled us to work effectively and facilitated communication with the local community and authorities. Two students from the Lebanese University in Saida joined us, and learnt survey methodologies and all aspects of fieldwork process, as well as contributing positively to our work. Combining forces with the underwater team enabled us to compare and adapt methodologies and fieldwork strategies in a useful two-way relationship. Sharing data in the field with geoarchaeologist Nicolas Carayon was also richly rewarding, and his conclusions about landform transformation on the coastline directly informed our approach to the archaeological record (a more detailed report is to follow).

Despite the high level of recent activity that has affected and/or damaged the archaeology, and the relatively small size of the study area, the archaeological results are promising. Different foci of activity can be identified in different time periods, including some previously unknown foci of prehistoric and Crusader activity and a possible prehistoric tell site just to the south of the study area. More detailed work in future is recommended, especially if development activity is taking place that will disrupt the existing deposits.