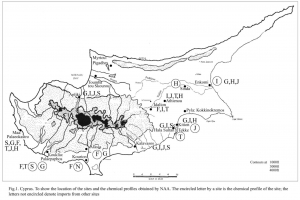 The fortified settlement of Maa: Palaeokastro is situated on the west coast of Cyprus on a long promontory with a sheltered bay each side of it to the north and to the south offering protected harbours. Coastal plains extend 3-5 kilometres from the peninsular to the foothills of the Troodos Mountains.

The aim of the Maa project was to carry out chemical analysis in Bonn, with H.Mommsen, by Neutron Activation Analysis (NAA) of 30 pieces of 12th century BC Aegean-style pottery from Maa in order to obtain the chemical profile of the site. This would allow exchange of pottery between Maa and other Cypriot sites, with known chemical profiles, to be monitored and, most importantly, exports from Maa to the east Mediterranean might be identified, leading to illumination of maritime patterns. A particular desideratum was to see if a chemical group of pottery recently isolated by NAA at Tarsus came from Maa. The group should come archaeologically from west Cyprus, but its chemical profile did not match that of Kouklia, which did export pottery to Tarsus.

Surprisingly the analysis has isolated imports at Maa from five other Cypriot sites, but no recognisable chemical profile from the site itself. One group with seven members might represent the local profile, but it is not large enough to be convincing. Ten samples were assigned as Singles; that is they could not be associated to any known chemical group. This is a larger number of Singles than is usually found in 30 samples. It is the result of basalt, which is present all round the Troodos in the foothills, being used in the temper of the clay; other tempers, such as sand, can be filtered out, so that the variable chemical elements can be measured, but basalt cannot (Sterba et al. 2009).

Most of the imports to Maa were from Kouklia:Palaepaphos, the nearest large site round the south coast to the east. This was followed by two imports each from Hala Sultan Tekke and Kition/Hala Sultan Tekke and single imports from Alassa and Sinda (see Fig.1). The lack of a chemical profile at Maa and the recognition of the imports there from other Cypriot sites gives important new information on Cypriot maritime trade with particular reference to the copper industry. 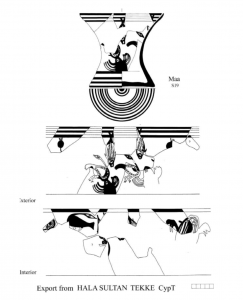 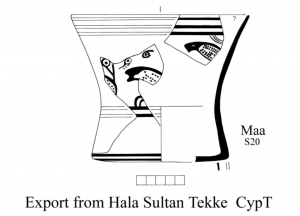