In situ conservation of cannons in marine environment: cathodic protection, cleaning treatment and coverage with geotextiles - 2016

This project aimed to study a comprehensive conservation plan for archaeological iron in seawater and using cathodic protection as the main conservation technique. Nine cast iron cannons were discovered in 2000 just off the coast of Marettimo island (Sicily, Italy), dated between the 17th and 18th centuries at about 15 m depth, dispersed as a consequence of the sinking of a Spanish ship.
The fieldwork took place in this area to investigate the conservation state of the cannons, how effective cathodic protection is as a method to protect cast iron artifacts in situ and whether the cleaning treatment and the coverage with geotextiles could affect it.

Methodology
The project was organized into six research trips in the field, three for each year (2017-2018).
This organization allowed the measurement of the environmental parameters in different seasons, two years in a row on 2 cannons, C and D (fig.1). Data-loggers were used to collect time series of temperature of the water and surface potentials.
Unfortunately an act of vandalism damaged the equipment left in situ and the team lost the first year of data.In order to allow the in situ conservation of the cannons, leaving them in their underwater context and enhance sustainable tourism, the artifacts were connected to the cathodic protection system, which consists of two zinc anodes placed on the muzzle and on the breech. The number of anodes and their size was calculated according to standard formulae in cathodic protection literature, which take into account the wetted area of the iron structure to be protected. Average values will indicate whether the object is in thermodynamically safe conditions (close to the immunity potential, normally assumed as about – 800 mV) or if it is actively corroding. Throughout the project measurements of surface potential in different points along the external surface of the cannons had been taken.
Continuing the project started in 2007 by the local superintendence, in collaboration with I.s.C.R. and Sapienza University of Rome, the team developed a different system by which the zinc anodes are connected to the cannons’ surface, trying to minimize its aesthetic and physical invasiveness.
The anodes were electrically connected to the cannons and kept firmly in place by the assembly illustrated in fig. 2 and 3, consisting of a transparent Melinex strip and two spring-loaded tips made of 316 stainless steel. Potential measurements were carried out using a Corrintec Rust Reader device (Corrintec Marine House, Chesterfield, UK), a self contained measuring probe designed for hand held diver operation, consisting of an Ag/AgCl reference electrode encased in a common water resistant shroud together with a digital voltmeter and connected to a replaceable hardened stainless steel tip enabling good electrical contact with the metallic surface. 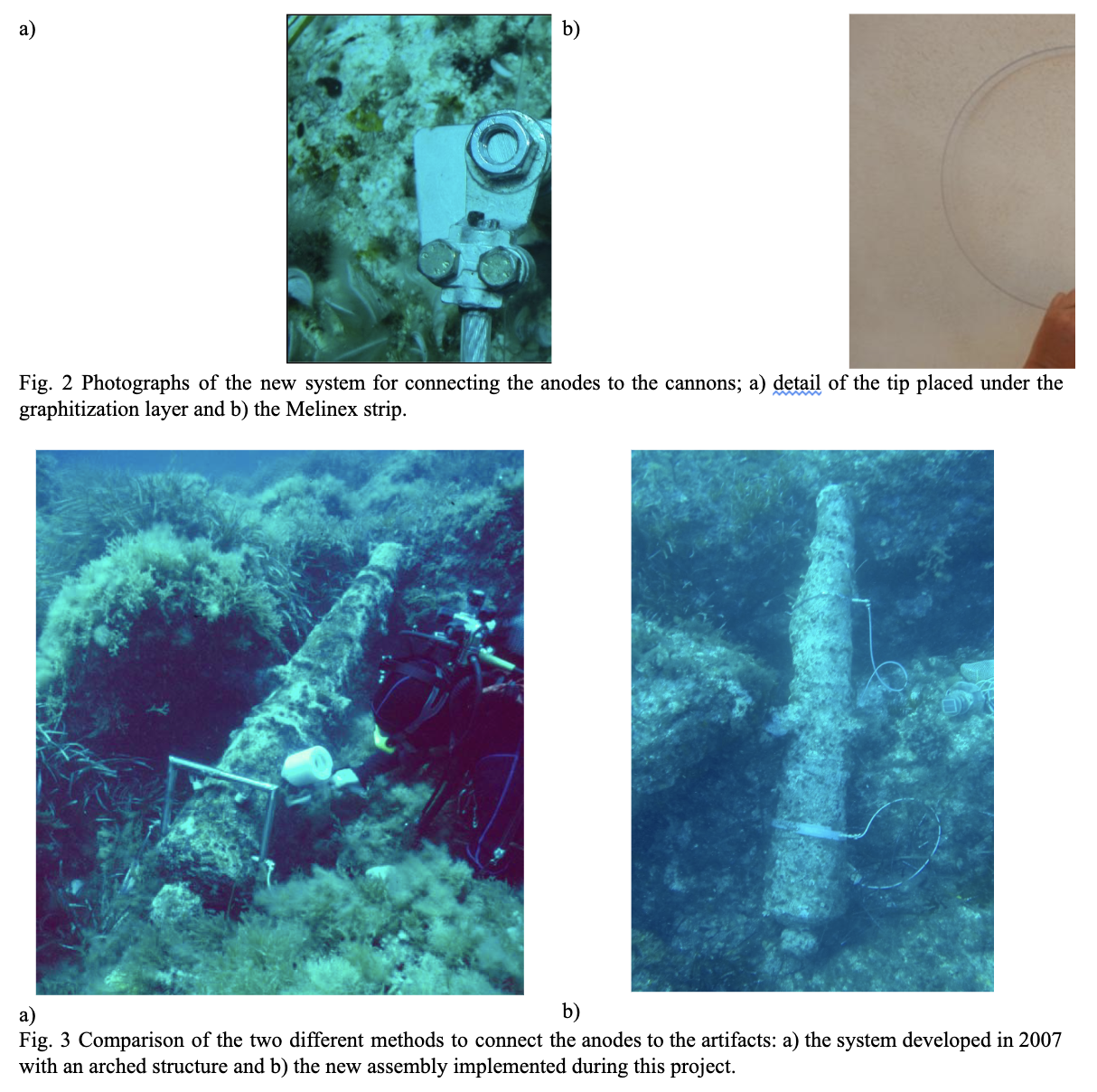 In order to test how a cleaning treatment of the cannon’s surface could affect its conservation underwater, one of the two cannons chosen for this research was cleaned and then its potential measurements were compared to the other one that hadn’t been cleaned. The aim of this procedure was to make the archaeological objects more recognizable and easier to study for a larger audience by removing the marine encrustations. The cleaning treatment concerned only the biological concretion layer and it was performed mechanically, using small hammers, chisels, metal spatulas and scalpels. We also had the opportunity to test brushes mounted on an underwater rotary tool kindly provided by Dr. Fabio Bruno, University of Calabria (UNICAL).
By cleaning the surface, exposed metal could be sandblasted and eroded, thereby a protective layer was essential. Geotextile sheets provide a smooth, continuous barrier across the seabed, which promotes a stable, often anaerobic, environment beneath it. A polipropilene geotextile TNT PP150-A was wrapped around the cleaned cannon to create a physical barrier against erosion and biological growth. This method allows periodic inspections, it is cheap and easy to lay underwater.

The surface potential measurements taken during every dive in different points long the entire length of the cannons gave answers to different questions.
They confirmed that two anodes placed on the breech and on the muzzle could guarantee a good protection on the whole cannon.
The average values of surface potential indicated that the cannons were in thermodynamically safe conditions and the yearly corrosion rate of the iron alloy does not seem to change significantly during the different seasons (fig.4).

Another useful information was that the values measured on the cannon that was cleaned and on the other one still covered in marine concretions had comparable values. This outcome was especially significant because it would prove that mild cleaning treatments on objects connected to cathodic protection systems do not affect their conservation underwater.

As regards the coverage with geotextile we weren’t able to collect enough data because the textile got lost after the act of vandalism and the one we laid after that episode got probably lost after extreme marine conditions. The archaeological site where the cannons are located is at only 13 meters of depth therefore tides and wave motion could have been too intense and prevent the textiles to stay on place.

The anodes after almost a year being connected to the cannons still didn’t need to be replaced. It was not possible to weight them but they were nearly at their full capability and it could therefore be said that they need to be replaced every two years instead of one. This information proves how the conservation underwater of small artifacts can be inexpensive compared to the retrieval and the full conservation treatment of the objects.