The Underwater Cultural Heritage of the city of Nora (Sardinia). Phoenician and Punic finds from the explorations of Michel Cassien - 2015 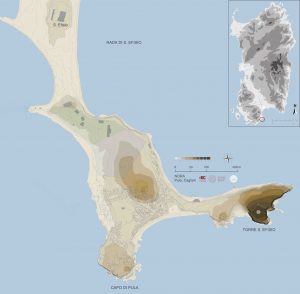 The project was awarded an Honor Frost Foundation grant in 2015. The research received logistic support from the Department of Cultural Heritage of the University of Padova and the permission of the Soprintendenza Archeologia, belle arti e paesaggio per la città metropolitana di Cagliari e per le province di Oristano e Sud Sardegna. The management of the research has been organised and carried out by Emanuele Madrigali with the active support (permits, accessibility to the depots, accommodation, software licences) offered by the mentioned Institutions.

The project aimed to analyse the large amount of Phoenician and Punic pottery from the underwater recoveries made by Michel Cassien off the coast of Nora (Sardinia). Six extensive campaigns of underwater exploration and recovery were directed by Michel Cassien and his team (Touring Club de France) between 1978 and 1984 in the waters around the Nora peninsula (Sardinia). Even though found in an extraordinary state of preservation, almost none of the recovered materials, 442 objects the majority of which is pottery, have been edited.

The Project aims to analyse the large amount of Phoenician and Punic pottery from Cassien’s underwater recoveries off the coast of Nora, the ‘first city of Sardinia’ according to Pausanias.The recovered materials are preserved in the Civico Museo Archeologico Giovanni Patroni in Pula, the present town near the site of Nora, and inside the Calamosca depot of Cagliari. Despite the considerable amount of collected data, Cassien published only limited concise articles, while the six detailed annual reports, with attached pictures, sketches and maps, remained unpublished in private libraries and in the archives of Soprintendenza.

Methodology
The overall publication of Cassien’s investigations only took place relatively recently (2014) by an academic team from the University of Padova. The re-emergence of the French explorers records has brought a fresh interest in to Cassien’s recoveries and on the Nora underwater context. In his reports Michel Cassien gave a preliminary description and proposed a generic classification of the recovered objects. For the ceramic containers those descriptions were essentially based on the body shape and sometimes linked to some general references and outdated typologies. 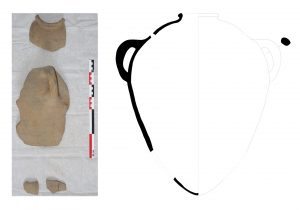 The research has been focused on the analysis and the contextual definition of different ceramic classes, dated in particular to the Phoenician and Punic period. The analytic study of the ceramic finds has been planned in several steps, including the collection and identification of the materials preserved inside the ceramics as well as the chrono- typological analysis of the artefacts. Each vessel has been named by the identification list developed in parallel to the recent reprint of the reports and linked as far as possible to Cassien’s original labels thanks to the identification of the finds through the analysis of the report pictures and the direct viewing of the artefacts. Due to preservation and storage circumstances it was not always possible to trace back from the new classification to Cassien’s tag and national inventory number.

During the research stages a new graphic and photographic documentation for each object has been produced in detail and inserted into a specific database. The hand-made drawings of the artefacts have been elaborated to printable tables by a vectorial drawing programme.

Moreover, the study has also focused on other significant data which can be gathered from the vessels. Macroscopic observations of ceramic fabrics have been carried out on all the material, which has enabled the identification of different groups, most of which may be consistent with a local/regional production, while others present the distinctive features of imported objects (e.g. clays referred to the KTS fabric – Karthago Ton Struktur from the north African shore). At the macroscopic level, ceramic fabric definition is mainly based on quantitative criteria. This methodology was carried out by making use of optical lens and binocular microscope to observe the samples. 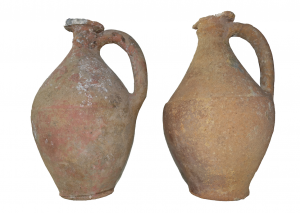 The identification of the finds mentioned in Cassien’s original reports allowed the team to contextualise the analyses carried out particularly on the contents of recovered transport containers. Specifically, zoological finds and vegetal remains preserved inside the amphorae, previously examined by Francois Poplin (1980 and 2014) and Philippe Marinval (2001), that have been associated to certain amphorae typologies. The data obtained on the contents has been related to the identification of the vessel morphology and the analysis of ceramic fabrics, and therefore the provenance of the containers.

Results
The research plan led to the creation of an updated catalogue of the Phoenician and Punic finds uncovered by Michel Cassien and allowed the team to launch an analytical comparison to other underwater discoveries. The study has been directed at several ceramic classes, such as cooking and table ware and other domestic classes (e.g. lamps and incense burners), but a deeper analysis has been focused on amphorae and other transport containers which are undoubtedly the majority of Cassien’s recoveries.
By considering morphological and fabric grounds it was possible to attach several artefacts to the original container although they were stored in several shelves and boxes and, in some cases, labelled with different inventory numbers. Therefore, in particular for transport containers, thanks to the reconstruction and identification of vessels a Minimum Number of Individuals has been estimated, primarily on the basis of rims.

The identification and the subsequent classification of each find led to a chronological and contextual definition of the recovered underwater finds, dating between the early 8th century BC and the Hellenistic period. Furthermore, dealing with questions inherent in the material culture such as the artisanal production, the origin of the artefacts and the transported contents contribute to our knowledge about the trade networks around the Mediterranean basin and on the role of overseas people on the development of multiethnic settlements far from their homeland. 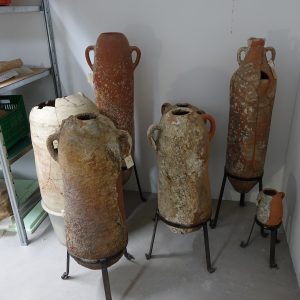 The underwater recoveries have provided substantial data to help understand which kinds of products were traded in amphorae. Because amphorae were the containers for traded goods, the study of containers and contents show us some of the imported and exported foodstuffs. From our sample of amphorae recovered off the coasts of Nora, in fact, some yielded well preserved data related to amphora contents. In particular, amphorae in which bovine and ovine meat was transported have been identified. Despite the minor presence of bovine meat in the amphorae from Nora compared to the total amount of bones, the finding is notable anyway: according to the analysis of Poplin, likely identification of faunal remains contained in one amphora is zebu (Bos taurus indicus), a bovine species which is endemic to North Africa. These archeo-zoological data provide substantial indications about the origin of the transported contents and can be related to the ceramic fabrics of the transport containers. For example, one 6th century BC amphora (Ramón type T-1.4.2.1.) which transported bovine meat, was likely produced in the Carthage area on the basis of fabric analysis.In some cases, bones were found in association with seeds, particularly with grape seeds (Vitis vinifera subsp. vinifera), an association which has been related to a specific practice of meat preservation during maritime transport.
After, the local production of transport containers underlines a different role of the settlement of Nora and its hinterland due to the Punic organization. The presence of ovine bones and the identification of locally made amphorae illustrate the increase, from the late 5th century BC, of specific manufacturing activities in Nora and the related trade flows to other Mediterranean shores. In parallel, through the Cassien’s recoveries have been also found other ceramic classes such as table ware (‘mushroom lipped’ and ‘trilobulated mouth’ jugs) made locally and then traded to other centres.

The main goal of the research was undoubtedly to reconstruct the maritime cultural heritage of the seascape of Nora through the collection of the material culture uncovered by Cassien preserved, and forgotten, in the mentioned depots.
From this perspective amphorae and other vessels from those recoveries offer an overview for a better understanding of local and overseas trade routes that affected Nora between the early Phoenician and the late Punic periods.This material culture highlights some essential phases for the reconstruction of the development of the settlement and the connections of this Sardinian centre with other Mediterranean communities. It is remarkable that the bulk of goods traded via amphorae in the Phoenician period came from the southern shores of the central Mediterranean. In the early Punic period, the nature of the site shifted to a larger, permanent urban centre displaying elaborated architecture in burial and settlement context by the early 5th century BC. The decrease of imports is probably related to forms of subsistence now more based on agricultural production in the Nora’s immediate hinterland.

The funded project fits fully into the research context of the city of Nora and is linked to other investigations at this site about the ancient settlement and the peninsula coastline (http://nora.beniculturali.unipd.it). The examination of the material culture from the underwater explorations offers us an essential element of integration along with the material data from the several excavations and the surveys in the mainland. A lot of comparable evidence and finds from the sectors of the Nora seascape investigated by Cassien were also confirmed during several underwater explorations carried out in more recent years.
The data from the project has been compared to other research and the results have been discussed and disseminated in international meetings and peer-reviewed publications.

Future Research Plans
A further step of the research will be the overall publication of all the analysed finds. The dissemination of the results has been mainly focused on transport containers (i.e. amphorae and small-sized amphorae) linked to their content and provenance (e.g. in the 1st Amphoras of the Phoenician-Punic World Congress held in Ghent: travel grant offered by HFF).
Furthermore, the described ceramic fabrics may provide a base of comparison with the clays identified in other local and regional contexts.

Forthcoming publications:
Madrigali E., Phoenician and Punic amphorae from the water of Nora (Sardinia). The recoveries of Michel Cassien (1978-1984), in R. Docter, E. Gubel, V. Martinez Hahnmüller, A. Perugini (eds), 1st Amphoras in the Phoenician and Punic World Conference. The State of Art. Proceedings of the conference held in Ghent, 15-17 December 2016. Peeters: Leuven.