The Lady of Anchors 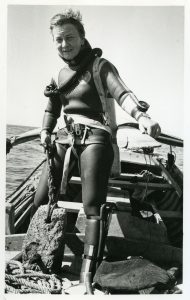 The Foundation has recently awarded a number of bursaries for students and researchers from the HFF region to attend the NAS online course: Anchor Recording using the Big Anchor Project Online Database. Honor Frost became well known in the maritime archaeological community as the ‘Lady of Anchors’ so this blog has been written to summarise her work and contribution to the study of anchors, particularly stone anchors from the eastern Mediterranean.

In the late 1950s whilst working in Lebanon, Honor Frost became interested in stone anchors. Initially acting as a diagnostic tool in her search for lost harbours, her work on anchors developed into a lifelong interest, putting stone anchors and ‘anchorology’ firmly on the archaeological map. Around a third of her archaeological papers were dedicated to anchors and her recognition of the importance of anchors is reflected in her title of one paper – ‘Anchors, the potsherds of marine archaeology….’ (1971). In this paper Honor explains that ‘to the archaeologist, anchors and other pierced stones found on the seabed are comparable with potsherds, because both serve as evidence in systems of deduction’.

Where stone anchors acted as markers of a wreck site, Honor demonstrated how their weight could help indicate the size of a ship, their material could help to identify the geographic origin, and the number of holes could help indicate the type of seabed expected at anchorages en route. Honor also studied anchors in seemingly unlikely places such as the Temple of Obelisks at Byblos, where six stone anchors were discovered at the Bronze Age temple, highlighting the symbolic significance of anchors. It was here that Honor also came across the first clues to dating stone anchors.

Honor at Ugarit
The Temple of Obelisks

Honor pioneered the development of a typology of stone and stock anchors. She began by keeping a card-index of stone anchors and over time typologies began to emerge, improving our understanding of maritime trade patterns particularly in the Bronze Age eastern Mediterranean. Honor also promoted a standard methodology for studying stone anchors, describing the minimum information required (Measure, Draw, Photograph, Sample, Describe, Weight). Writing in 1987, Honor explained that although shape is the most obviously diagnostic feature, this was rarely noted when recording stone anchors. Given the lack of generally accepted rules or visual conventions, the criteria developed by Honor followed strict archaeological criteria, highlighted the need to build up a corpus of material for comparison and emphasised methods of interpretation be no less rigorous than those used for potsherds.

Images from the HF archive courtesy of the Special Collections, Hartley Library (University of Southampton)