Update on the controlled destruction of Agios Spyridon 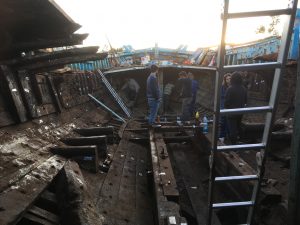 A team from the Maritime Archaeological Research Laboratory (MARELab) of the University of Cyprus has completed the next phase of the Agios Spyridon project which included the controlled dismantling and in situ recording of the vessel. The wooden trawler was built in 1950 and withdrawn in 2004, and was one of only a few large wooden trawlers surviving in the eastern Mediterranean. The vessel was dry docked but due to a lack of maintenance the structure deteriorated and the newly elected municipal council decided that the vessel should be destroyed for safety and aesthetic reason. A rescue mission was launched by MARELab and the team started by creating a 3D model of the vessel, however, it could not be saved and a plan was made for the controlled destruction and full recording as the only way to mitigate the loss. The controlled dismantling and in situ recording was completed at the end of 2019 using conventional measurements, laser scanning and photogrammetry. Alongside this the project raised awareness about the preservation of nautical heritage, undertook enthnographic documentation and enabled training for students of maritime archaeology. Moreover, wishing to preserve as much of the material remains as possible, artists and craftspeople were invited to choose pieces of the boat that would inspire them. The goal is to exhibit these creations as parts of the vessel’s biography, which will add to its value as a lost monument of the island’s cultural heritage.

Find out more about the project here