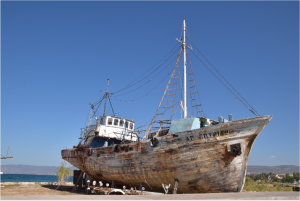 The trawler Agios Spyridon, built in 1950 on Crete, was registered in Cyprus in 1954 and was withdrawn after 50 years, in 2004. It is a 23.80m. long vessel, of a type known as karavoskaro in the Aegean, and it is now one of the few large wooden trawlers surviving in the entire eastern Mediterranean. It is a slim vessel with elliptical stern and “S” shaped stem- post.

After its withdrawal, the Cypriot Department of Fisheries was convinced to keep it as a living monument of the recent vernacular maritime tradition and saved it from destruction. The trawler has been dry docked ever since, outside the marina at Latsi, Polis Chrysochous, on the northwest coast of the island. The Latsi harbour has been the last port of call for the trawler and the municipality of Polis Chrysochous took the responsibility to keep and maintain it, as it was a well-known local vessel. It was then agreed that it should be preserved and systematically maintained. Regrettably, this did not happen and since 2004 the Agios Spyridon has been placed on concrete blocks, uncovered and roughly supported on its sides with beams. Under these conditions, the deterioration of the whole structure was only a matter of time; in 2018 the new mayor decided that the vessel should be destroyed for safety and aesthetic reasons.

Fortunately, after MARELab’s intervention he gave an extension for the rest of the 2018, in order for the vessel to be recorded. During a rescue mission, organised and funded by MARELab and the Cyprus institute, between March and May 2018, the vessel was recorded with conventional methods (Figs 1, 2) and laser scanning. In January 2019, MARELab requested a second extension, so that a better assessment of the boat could be made and funding could be raised for either its reconstruction or it’s controlled destruction. The municipality officially accepted a second extension up until the end of spring 2019, on the condition that a convincing action project plan would be submitted to them by that time.

Fishing with the use of fishing nets (trawls) pulled along the bottom of the sea or in midwater has been known since antiquity, as gripos (γρίπος in Greek). According to written sources and depictions, the trawls were laid in the sea and then the net was slowly hauled in from both ends. Fishing with trawls began with oared vessels (trawlers), then with sailing (sail-trawlers) and more recently with engine-propulsion vessels (engine-trawlers). Engine-trawlers had to be sturdily constructed vessels with massive engine power in order to pull the nets as long as was needed to regularly complete the fishing procedure. Thus, the development of the fishing practice itself has also been directly connected with changes in traditional shipbuilding and navigation.

In Cyprus, the first use of engine-trawlers was documented in the early 1920s. Ever since, the specific method was used with traditional fishing gear, which was gradually replaced with modern electrical or hydraulic systems. However, the use of traditional trawlers has never been recorded in Cyprus, or anywhere else in the eastern Mediterranean. Thus, the study and recording of a traditional trawler will set the basis for the study and recording of other trawlers of the area as well.

Agios Spyridon preserves elements of a long wooden shipbuilding tradition, including: (i) wooden parts designed and constructed with traditional methods not used today, (ii) skeleton and reinforcing wooden parts with natural intensive curves, (iii) pegged joints as they were used on ships in antiquity, as well as metal joints found to be used at least since the Byzantine period, (iv) sealing techniques like caulking and tarring used for centuries in the Mediterranean and beyond. Moreover, all the original equipment of the vessel, including the engine and the propulsion system as well as the traditional fishing gear, is also preserved. Agios Spyridon is one of the last large traditional fishing vessels extant, and a living material evidence of the recent traditional nautical technology that is gradually disappearing. For all these reasons, the vessel constitutes a unique monument in the local nautical tradition that must be saved, but action has to be taken immediately, as its condition is really at the point of no return.

Recording a Wooden Fishing Trawler in Cyprus, through Controlled Destruction

Aims and Objectives
The aim of the project is to document in detail Agios Spyridon, in order to contribute to the study of the traditional fishing trawlers in the eastern Mediterranean, with a focus on shipbuilding and fishing methods. The destruction of the vessel will be executed under controlled conditions and will be supervised by the MARELab team and its associates, so that a comprehensive recording of its interior hull is achieved and historically important parts are preserved.
Apart from the vessel’s documentation as a rescue action in a case of heritage at risk, a series of activities will take place after its destruction, adding value to the project:
a. The methodology of controlled destruction will be carefully recorded and published, thus contributing to the development of shipbuilding studies in the eastern Mediterranean.
b. The preserved parts will be recorded by MA students of the University of Cyprus, thus enhancing education and training on ship and shipbuilding on the island. These parts will also complement MARELab’s existing collection and will be at the disposal of students, researchers and individuals for further research, in the future.
c. Agios Spyridon will be MARELab’s first externally funded project about historic ships and vernacular shipbuilding, which will help to further develop the domain on the island and will enhance the field’s presence in the University, where a lot of work has already been done: a collection of boats has been created and several training courses and public awareness events have been organised (see http://www.ucy.ac.cy/marelab/en/research/traditional-boats).
d. Raising awareness during and after fieldwork is among the project’s priorities. Although the specific ship could not be saved, its destruction will be used as an example to be avoided and the societal benefit of saving monuments of maritime heritage will be promoted through social media and the local press.

Expected Results
The documentation and recording of Agios Spyridon, conducted by experts who will place the boat in its historical, ethnological, and archaeological context, will contribute considerably to the study of vernacular shipbuilding in the eastern Mediterranean. The project is the first of its kind in the region and therefore is expected to contribute significantly to the existing knowledge on fishing boats and shipbuilding in the eastern Mediterranean. Moreover, it will enhance education and training on vernacular ships on Cyprus and set the basis for the development of recording methodology of historic ships.
It is also expected to raise awareness for the importance of historic wooden vessels as indispensable parts of maritime cultural heritage.

READ ABOUT THE PROJECT IN THE LOCAL PRESS