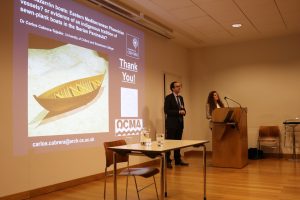 The first Maritime Archaeology Graduate Symposium (MAGS) was held in the Ioannou Centre for Classical and Byzantine Studies (Oxford) from the 3rd to the 4th February 2018. MAGS 2018 was funded from the Honor Frost Foundation (HFF) and the Oxford Centre for Maritime Archaeology (OCMA) and was organised by graduate students in maritime archaeology at the University of Southampton and the University of Oxford. The event provided a platform for early-career researchers working in maritime archaeology to present their research, as well as a vital opportunity to promote collaboration between scholars focused on the eastern Mediterranean.

The two-day symposium proved to be a huge success, with more than 45 attendees and 25 speakers presenting on a number of subjects – ranging from maritime connectivity to ship construction and chemical analysis of shipwreck cargoes. The symposium brought together postgraduates and early-career researchers from various universities in the UK and abroad, such as University College London, University of Sheffield, Exeter University and Cadiz University in Spain.

Day 1, focused on eastern Mediterranean maritime archaeology and sponsored by the HFF, was divided into three sessions of ships and cargoes, maritime movement and trade, and the interpretation and reception of maritime archaeology in the eastern Mediterranean.
Presentations sparked questions and lively discussions from an enthusiastic crowd that benefitted both speakers and attendees. In order to promote and give visibility to postgraduate and early-career research, MAGS invited a number of organisations, such as the International Journal of Nautical Archaeology and BAR Publishing, to set up booths and make brief presentations.

The proceedings of MAGS 2018 are to be published over the coming year as another collaboration between HFF scholars from the CMA and colleagues from OCMA. It is hoped that MAGS can become a regular, annual event for postgraduates and early-careers to present their findings and to become a part of the larger community of early-career researchers focused on eastern Mediterranean maritime archaeology.

More details can be found on the MAGS website here