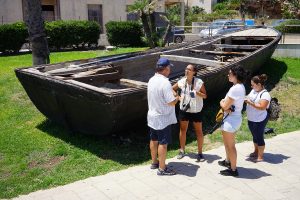 Our project initiated documentation and valorization of the material and oral historical records of the most important traditional fishing practice of southeast Sicily, the mattanza. This communal tuna harvest has been a key feature of local culture, with roots tracing back centuries if not millennia. Yet its distinctive boats lie derelict, its processing facilities remain largely untapped heritage treasures, and the human stories that illustrate this practice are similarly fading. In an effort to preserve this tangible link to the past, we undertook digital recording of the vessels, spaces, and memories associated with the local mattanza. The resulting 3D models and associated oral historical data form the basis for not only detailed study of local shipbuilding traditions and the social lives of fishing communities, but also new opportunities to bring distinctive heritage into the public sphere. Most importantly, these first efforts generated community interest and a new network of public institutions and private individuals partnering to stimulate continued work on this heritage as a mechanism for local development (project website).

Methodology
Practical logistics, permissions, and coordination with ongoing underwater fieldwork necessitated that we spread our project work over the course of two summer (June-July) campaigns. This allowed us to build connections and expertise that in turn created new opportunities to work on not only the two boats that were our initial focus, but other vessels as well as the associated historic industrial facilities, the tonnare. A warm welcome in Portopalo di Capo Passero, just south of Marzamemi, encouraged us to undertake documentation here of several well-preserved but endangered boats in the local town square as a mechanism for developing our methodology and offering support and encouragement for their restoration. This was followed quickly by documentation of the most important and unrestored boats in the area, located on private property of the adjacent Isola di Capo Passero and back in the town center of Marzamemi. Shortly thereafter, at the urging of the local authorities, we extended this 3D work to the nearby tonnare themselves, including both Marzamemi’s historic structures (which have been partially restored through private efforts) as well as the abandoned (un-restored) industrial facilities that span Portopalo’s coastline and offshore islet. 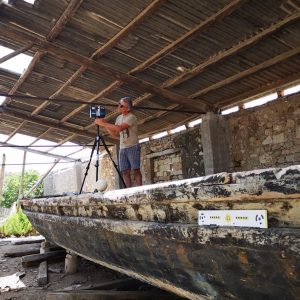 On-site documentation utilized a mix of laser scanning and photogrammetry designed to meet the varied needs of research, preservation, and public outreach. Laser scanning (using a Faro S70) addressed the demanding specifications for surveying architecture of both the boats and tonnare, guaranteeing reliable accuracy and fine resolution of relief whether operating at close range or over longer distances. For the vessels themselves, photogrammetry in turn generated additional rich texture. This combined technological approach offered a comprehensive solution to the challenges posed by their preservation and current situation, which often required that work take place in conditions where controlled lighting and unobstructed access to all angles were not always possible. To complement this digital recording, a program of semi-structured interviews allowed us to gather data on historical memory and the socioeconomic worlds of these boats and spaces, and the practices and communities of the mattanza more generally. Discussion started broadly from what we perceived as more pertinent topics but granted the interviewees much flexibility to steer toward what they felt were the topics most connected to the theme, and most important to document alongside heritage. This flexible system not only captured certain stories we aimed to record, but also pointed us toward new topics and helpful additional contacts.

Our initial focus was on the crumbling remains of the last two mattanza boats at Marzamemi, but we ultimately were able to initiate a much broader program of digital documentation that will continue for several more seasons and ideally generate additional interest and investment in this distinctive maritime heritage and history of southeast Sicily. Our efforts resulted in the successful recording of the material remains of a half-dozen vessels as well as two tonnare, offering baseline data to inform attempts their preservation and eventual restoration. This work will also support a more focused technological study and production of construction drawings for several vessels of each major type, including the largest and most complex of these boats during the upcoming season. Our interview approach allowed us to record video discussions with several of the last practitioners of the local mattanza. These oral histories will continue in future seasons, providing the rich human stories to help bring these boats and spaces to life through virtual and physical engagement. The project is therefore already in the process of providing a new scientific archive, but has also raised public awareness and helped launched a broader heritage program now in development and involving a wide array of local public and private stakeholders.

For each vessel and structure, our methods centered on high-precision laser scanning and photogrammetry to produce a full 3D model that would support both technical research as well as management and preservation. Contextualizing this material culture drew on a series of semi-structured interviews with members of the local fishing community, particularly those of the older generations most closely tied to the last mattanza. These efforts drew widely on the expertise and efforts of archaeologists, architects, heritage professionals, and students at Stanford University, Suor Orsola Benincasa University of Naples, Brock University, Texas A&M University, and the Soprintendenza del Mare, as well as public and private partners including especially the Comune of Portopalo di Capo Passero.

As we continue processing and studying the models, we constantly learn more about the technologies, traditions, knowledges, and social dynamics surrounding the mattanza, especially in light of the descriptions provided by our local interviews. For example, we can see features and adaptations of a general vessel form to the particular challenges and opportunities of the mattanza’s complex system of nets, the hauling in over the side of heavy catches, and the like. But no less important is the public interest this has generated, both broadly within the towns in which we were working but also among the community of fishermen, civic administrators, and families that had controlled these businesses for generations.

Future Research Plans
Continued research will focus on the construction techniques, social spaces, and community knowledge associated with these boats, particularly the largest preserved example, and additional interviews. This project has also helped catalyze interest in local history and tourism economics into heritage valorization and a partnership to restore and revitalize the tonnare to support sustainable growth and a newly branded and recognized mattanza as Mediterranean maritime intangible cultural heritage.

Find out more about the Marzamemi Maritime Heritage Project here 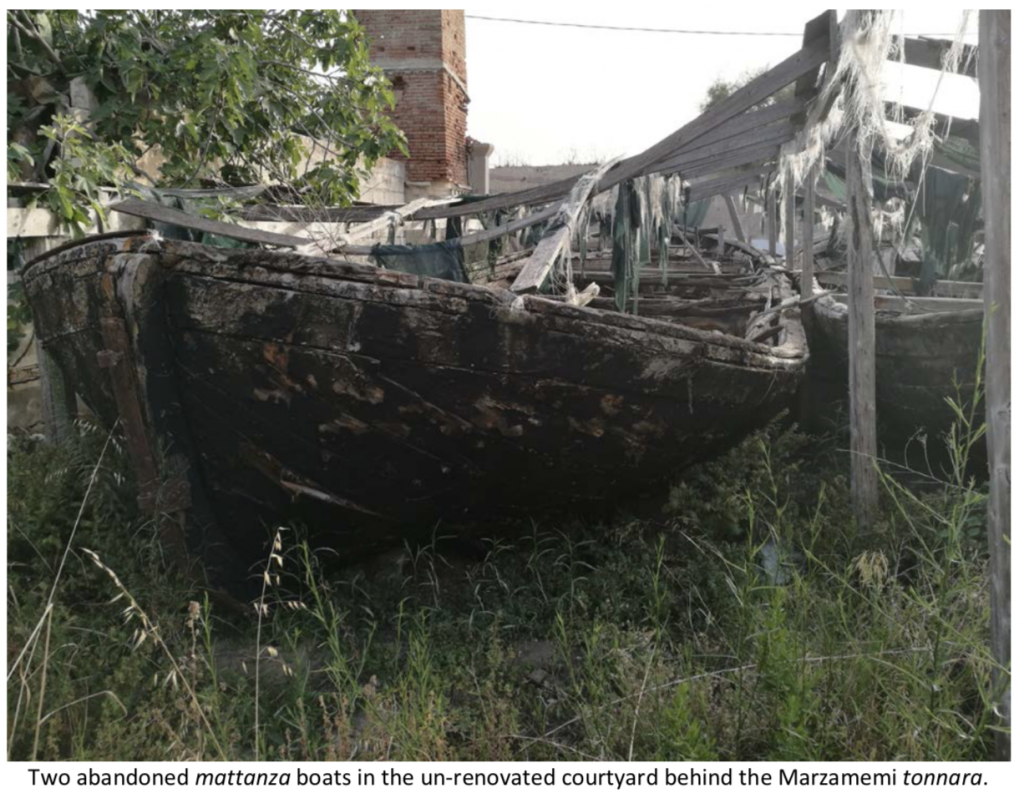 BACK TO SICILY PAGE