Thanks to its unique position in the eastern Mediterranean, Cyprus was an important landmark and stop-‐over point for ancient mariners. Recent maritime archaeological research, especially from the southern and western regions of Cyprus, have demonstrated the unique position of the island (Leidwanger, 2013; Demesticha, 2011; Leonard, 1995). According to these studies, it is likely that the north coast of the island will be as archaeologically rich. However, the archaeology of this region has been largely neglected and underexplored. This makes the constructive evaluation of the island’s archaeology as a whole, problematic.

This project proposed that a rich marine archaeological heritage, matching recorded related coastal sites should be expected for the Northern coast of Cyprus , but that it is under threat. The project undertook an assessment in the area of Akanthou as an exemplar to identify underwater sites because protective measures for known coastal sites at this location are already in place and might most easily be extended to the underwater environment.
The project was very successful. Four kilometres of coastline were surveyed. Artefacts in spatially significant groups spanning the Hellenistic period to the 19th Century were recorded corresponding to known coastal and harbour sites. To limit potential threats from recreational diving, fishing and erosion the records of surveyed areas were submitted to the Higher Monuments council in 2018 and were declared as first degree protected archaeological areas. The project provides a model for continuing and expanding archaeological site identification and protection work for the Cyprus. 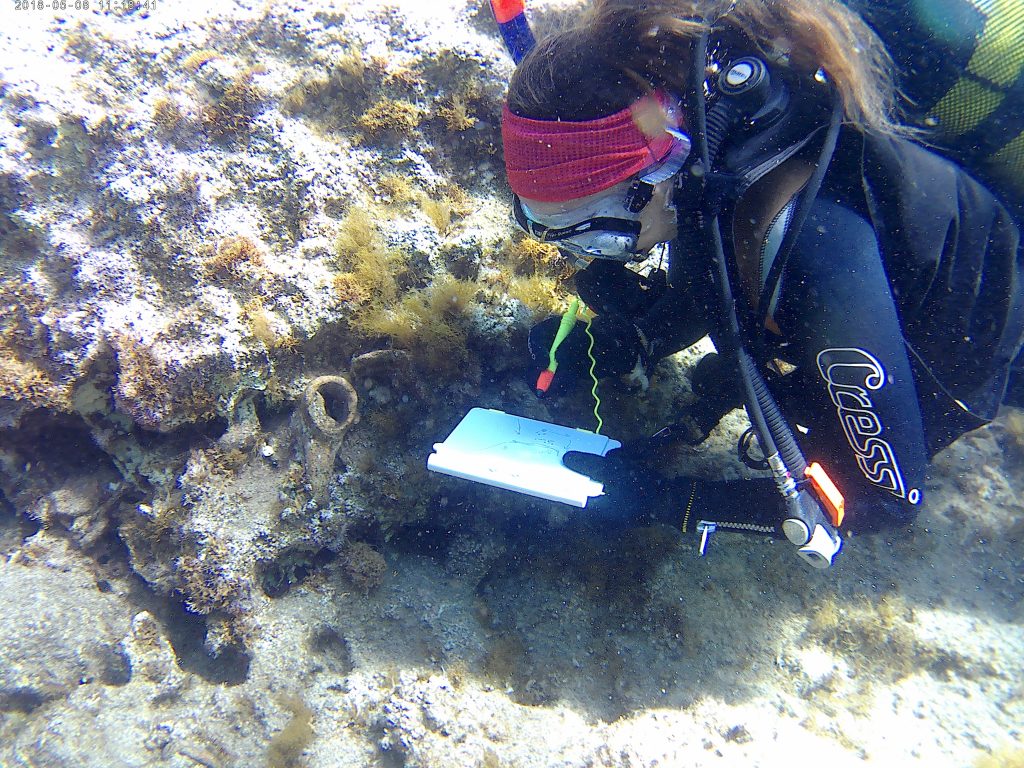 Methodology
The area identified for survey lay between two known classical sites as a series of natural bays. The area had been investigated by field survey since 1996 by Sevketoglu, Hanson and Tuncel. The protected Akanthou Aceramic Neolithic site lay in the middle of the survey area. The natural bays within the four kilometres stretch of coast provided achievable target limits for an underwater survey that could be carried out within the project time and due to some safety-related issues. Moreover, after the field surveys selected three specific research areas demonstrated the necessity of more attention within the period of the project. Taking this fact into account, restricting the research area by four kilometres has appeared as the best choice for this research project.
The initial survey began at a natural bay with a coastal 19th Century Carob Store (CSR) as a known heritage site, with evidence of a submerged pier. Carob was an important commercial export during the 19th Century, stored and shipped from a number of small carob warehouses in natural harbours along the shoreline. These harbours are likely to have a long multi- period use.
Survey continued to the West of CSR, until a bay was reached with the potential to be an earlier anchorage or harbour. It may relate to a settlement named in classical texts as Aphrodision (APN). The bay is presently used as a fishing boat shelter. Field surveys had previously identified potential settlement with late Roman pottery assemblages in the field and on cliffs above this location.
Survey continued east of CSR to a natural bay below the Akanthou rescue excavation and further east to Karaburun (KRB). In the fields above this bay is a Aceramic Neolithic site as well as multi-period pottery distributions (including 5th-8th Century AD assemblages). Additionally, rock cut cemeteries and other rock cut features can be found in the cliffs and limestone rock outcrops above the bay.
The area/coast between Akanthou and Karaburun holds further smaller natural bays, which were not systematically searched due to resource and time limits. Survey at the CSR, APN and KRB bays were prioritized to provide the greatest chance of identifying underwater sites given proximity to known coastal heritage sites.
The survey was carried out between 2nd May 2018 and 16th May 2018 and consisted of 15 diving days. Visibility and conditions were very good for observation of underwater features.

Results
During the underwater survey at Akanthou, the team recorded a number of groups of artefacts in plain view on the shoreline and sea floor dating to the Hellenistic period through to the 19th Century.
CSR hosts one of the biggest and well-preserved carob stores on the North shoreline. The team recorded the remains of the carob store pier (one of three surviving in Cyprus), spread over a 50m2 area of the sea floor.
APN provided the possibility of an anchorage with a long history of use going back to the Roman period. Transport amphorae dominate the artefact groups found here, but additional artefacts included tableware ceramics, small marble fragments, a millstone and a possible stone harbour mooring post. No architectural remains were observed during the underwater survey but a potential structure was recorded on the shore close to sea level.
The survey at the KRB revealed concentrated pottery distributions including numerous amphorae. The amphorae may relate to the rock cut tombs above the bay dated to the Roman period.
The shore and underwater surveys undertaken identified the erosion and collapse of the natural limestone terraces into the bays and the associated erosion of archaeological deposits as a consistent observed issue. Cliff erosion is therefore depositing multi-period artefacts onto the shore and sea bed from coastal archaeological sites.

The aim of locating and defining marine cultural heritage was met through underwater and shoreline survey of several bays on the Akanthou coastline. These identified groups of artefacts of multiple periods that correspond to identified coastal sites.
The identification and defining of cultural artefacts and structures led to the expanding of protected status areas from coastal sites to the entire 4 km shoreline and seabed.
The survey identified erosion as a considerable threat factor for underwater heritage on this coastline.
The results of the project contribute to the long-running cultural heritage protection project at Akanthou and expand the declared area of protected landscape. This will allow sites to be included into conservation and heritage awareness initiatives. 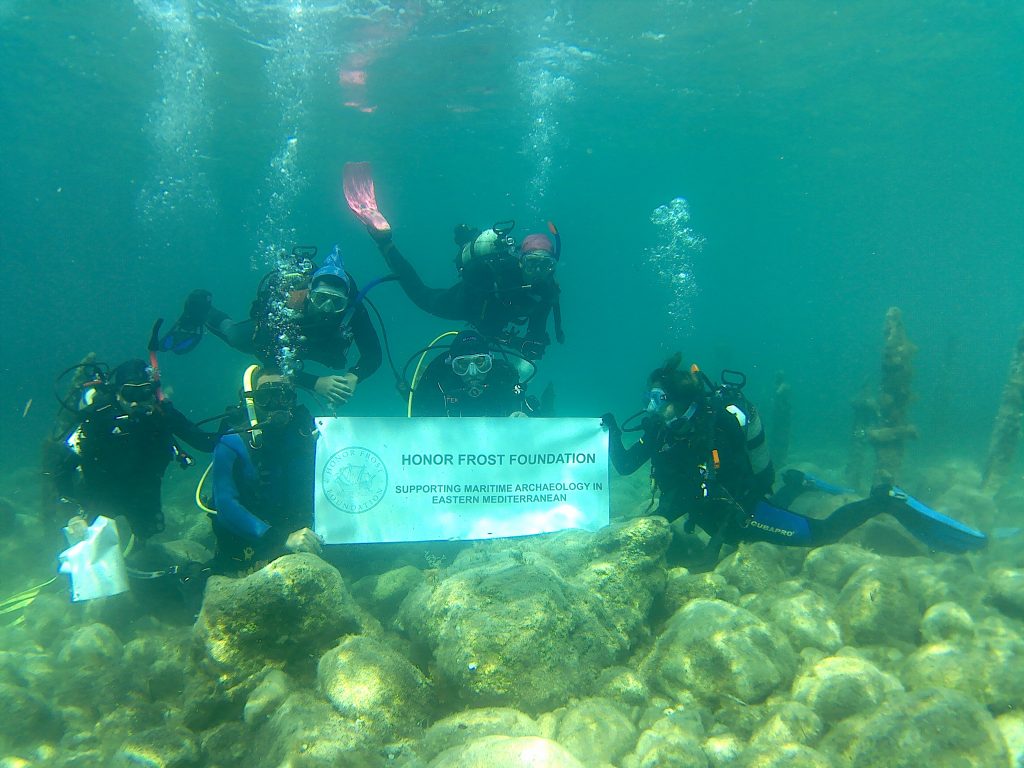 Future research plans
The project acts as a successful ‘pilot’ study providing evidence in all areas surveyed of a rich surviving maritime heritage. Previous investigations on this coastline have recorded 10,000 years of archaeological heritage. This project demonstrates it is far more extensive than has currently been revealed. Systematic survey and recording of the coastline of Cyprus is likely to allow assessment and protection of a great number of as yet unidentified underwater and coastal archaeological sites.