The Caesarea shipwreck is located off the northern harbour of the city built by Herod in the late 1st century BCE. The site was originally discovered in 1976 and partly excavated in the 1980’s. However, as only some parts of the ship were originally studied a reappraisal of the shipwreck was carried out from 2017 and 2018 by a team from the University of Haifa. The project aimed to create a new and accurate plan of the ship, develop a 3D photogrammetric model and recover samples for analysis with the aim to better understand the ships construction, date and context. 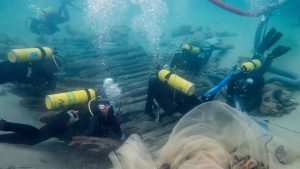 The Caesarea shipwreck was discovered in 1976 and studied during the 1980’s. It appeared that the hull belonged to a large ship which sank in the Early Roman periods. All these reasons make this shipwreck noteworthy. However, only some parts of the shipwreck were documented in the 1980’s.

The first season of fieldwork was undertaken with both students and volunteers from December 10th to December 28th 2017. A camp was set up on the beach close to the shipwreck and work was carried out over a period of three weeks. Because of the rough sea conditions, it was only possible to dive on seven days. The fieldwork had also been delayed by a month and during this time the wreck which had been exposed for a long time was now fully covered in a thick layer of sediments. Huge quantities of sand had to be removed using three dredgers. Most of the excavation time was dedicated to this task. Once the sediment was removed, the locations of discovered items were carefully recorded. However, the items found between the frames may not have been in situ, as the wreck was long exposed. Most of the sherds were torn and moved by the sea for a very long time. Thus, they may have not belonged to the wreck. More probably, they may have come from her harbour context. 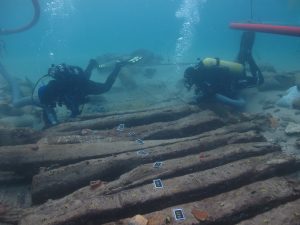 While the wreck was progressively uncovered, various marks were fixed on the surviving hull. The frames were numbered by tags from 7 to 26 and the planks from 5 to 12. At each end of the hull, two areas, whose frames had been removed by the sea during the past decades, were reached on the very last day of the excavation. These numerous marks made the drawing of the frames easier. Seventeen out of the twenty frames were drawn, as well as two planking joints in the southern part of the hull. Wood samples were collected on each piece of the hull, once it was drawn. All along the excavation, photos and videos were recorded in order to produce an accurate orthoplan of the wreck.

A preliminary consideration of this excavation shows how this shipwreck has much suffered for the last decades. More than one third of her frames were lost. Even if the hull is made of large pieces, the remaining parts look fragile and damaged. It means that the hull has been collapsing, slowly but surely, in spite of the numerous and large sand bags laid on the site at the end of the 1980s: the 2017 excavation showed that only a few of them were still protecting the wreck.

The project was supported by the Honor Frost Foundation and the University of Haifa. The excavation was conducted with kind permission, assistance and cooperation of the Israeli Nature and Parks Authority at the Caesarea National Park. The help provided by the Israeli Antiquities Authority and the French Research Center in Jerusalem was also decisive.

The three-week excavation was carried out in November 2018. The 2017 and 2018 excavation seasons showed that the wreck has suffered a lot in the past decades, as she has been almost continuously exposed. The excavation aimed at producing a new and accurate plan of the hull remains, relying on hand drawings and a photogrammetric model. During the excavation, as planned, a number of wood samples were collected both for the identification of the tree species and dendrochronology. The few wooden pieces recovered from the wreck have also been carefully examined in order to determine tool marks and architectural features. 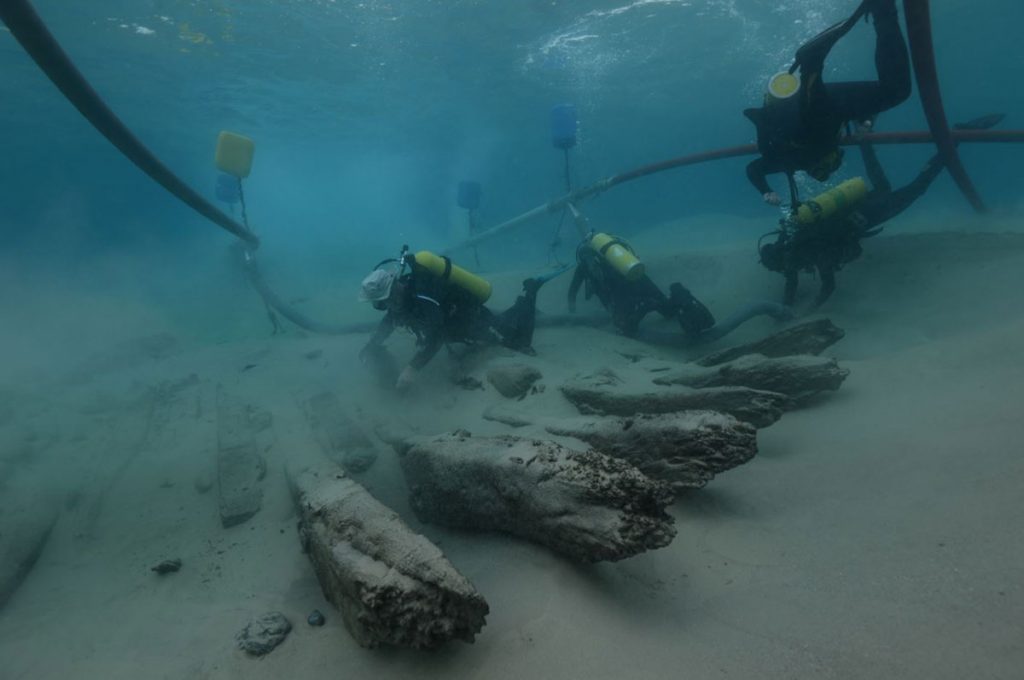 The northern and southern parts of the hull fragments, where the frames have not been preserved, have been marked and drawn. Then numerous pictures of the whole hull and of each part were taken in order to produce a photogrammetric model. Six cross sections of the hull were carried out firstly where the section is better preserved, but also in other parts where it is more damaged. Once the hull had been fully marked and drawn and the cross sections carried out, wooden samples were systematically collected, as planned, both for the identification of the tree species and for a dendrochronological study.

The architectural features seem to show that the hull was built in the late Hellenistic or imperial period. Mortise and tenon fastenings have been found under the frames. Moreover, a close examination of the timbers recovered from the shipwreck gave the opportunity to check how the pegs were inserted. It seems that the ship was built shell first.

Dendrochronological analysis is ongoing and C14 analysis may be carried out in order to obtain a more accurate date for the ship, alongside this an understanding of the geomorphological context is a priority in order to understand if the shipwreck was abandoned on a beach, or if she sunk.

Once the excavation was over, the hull was then fully covered with three hundred light sand bags, in addition to the hundred ones, much heavier, that were used by the divers in the 1980s.

BACK TO ISRAEL PAGE