The Foundation has so far supported two fieldschools in Lebanon led by the Nautical Archaeology Society. The aim of the fieldschools is to build capacity in the region through training in the recording and surveying of underwater cultural heritage.

At the beginning of September 2017, with funding from the Honor Frost Foundation, two NAS senior tutors Ian Cundy and Dave Johnston flew out to Beirut to run the first NAS Underwater Recorder & Surveyor Course in Lebanon. The four-day course was funded by the Honor Frost Foundation, and was run in conjunction with the University of Balamand. It is hoped that this short course will be the start of wider initiatives to support activities and education directed at underwater cultural heritage in Lebanon. 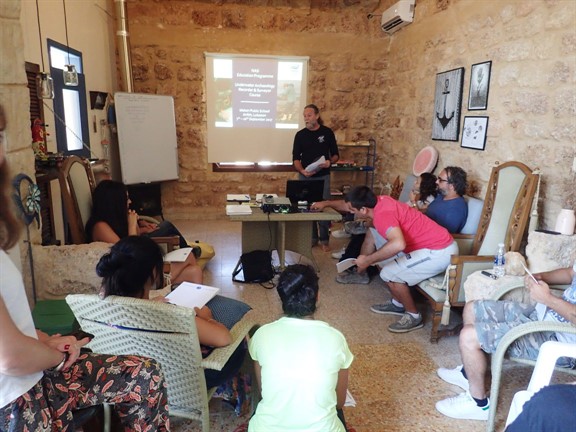 The Underwater Recorder and Surveyor course was delivered to ten Lebanese students in the town of Anfeh, which lies on Lebanon’s Mediterranean coast around 42 miles north of Beirut and 12 south of Tripoli. Artefacts from the area have been dated as far back as the Late Bronze Age, and a 400m long rocky peninsula that juts out into the sea was once home to a large Crusader fortress. Today, however, the town resembles a typical north-eastern Mediterranean fishing village, albeit one that is obviously popular with tourists. A modern take on Anfeh’s history was clearly demonstrated by the base for the course, which was a large quirky Airbnb flat known as Marsé. The flat had large communal indoor and outdoor areas, which were rapidly converted into a classroom and dry-practical exercise space. The house could sleep eight, with additional students sleeping in the adjacent Makari Public School, which also houses the dive centre. 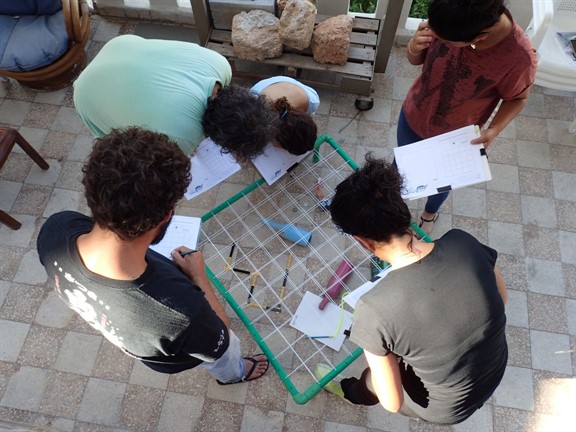 The course was run in English, with Arabic translations provided where necessary by local maritime archaeologists Dorothy Chakra and Dr Lucy Semaan. The diving was organised and overseen by local dive instructor Mario Kozaily.

The timetable followed the conventional NAS Underwater Recorder and Surveyor Skills Course (http://www.nauticalarchaeologysociety.org/content/skills-days) format, with the first day spent on theory and dry practical exercises, followed by a couple of days diving, interspersed with further theory. In September, the daily air temperature at Anfeh is in the mid-30s Centigrade, with the humidity climbing through the day to 70–80%, so the days on land took on a pace of their own. However, diving in the 28-degree waters of the Mediterranean was an absolute delight. 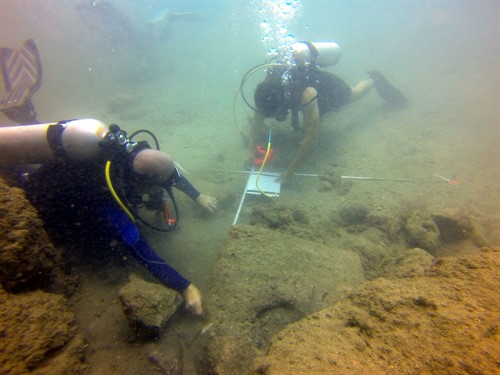 The diving took place on the south side of the peninsula, which is only a 20–minute boat ride from a modern marina to the north. The underwater site consists of a large number of stone anchors which lie at around 10– 12m where the sandy seabed meets the rocky base of the headland. Dr Lucy Semaan has been working in this area for several years, and has produced reports on the site and created a collection of photogrammetry images of many of the anchors, so she was ideally suited to help out with the course, both to instruct and to talk to the group about what there was to see and the work she had been carrying out. 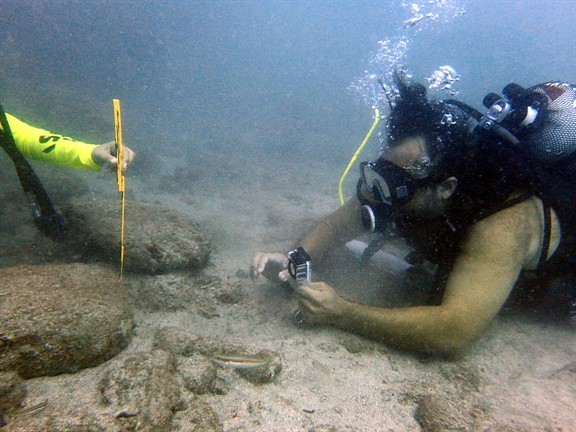 The students ranged in age from their 20s to 50s. All had previous terrestrial archaeological experience, and most were either still studying the subject at university, or currently working in the field. Although none had previous experience of maritime archaeology, and most had only just managed to complete their first handful of qualifying dives—they all took to underwater work with great enthusiasm, and what they lacked in diving proficiency was more than made up for by their keenness and enjoyment of being underwater.

The final day of the course started with a ‘dry-practical’ 3D surveying exercise in one of the flat’s gardens. 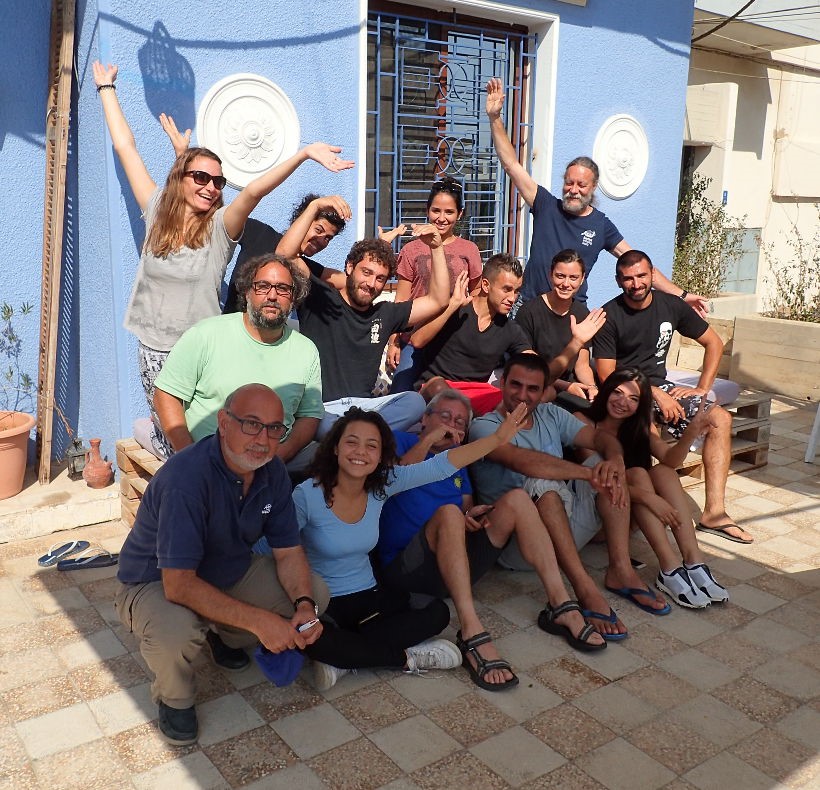 At the end of the four day course participants were asked to write their thoughts about the event and about underwater cultural heritage in Lebanon.

All in all I am grateful to have had the chance to participate in the course. My expectation concerning what I would learn in these four days were surpassed. Ian and Dave did a great job in teaching us the different techniques and methods used in maritime surveys. I plan to further expand my knowledge and skill set which I have learned in the course in the hope of participating in future projects in the near future. Sergio El Kesrouwani

This training gave me the opportunity to live two passions at the same time: Archaeology and diving. Thanks to the HFF. I sensed that this training raised awareness on the all potential discoveries that are waiting for us in this part of the world. It also showed that we are not well prepared and have a lot to learn. Serge Soued

In the end I would like to say that the maritime archaeology in Lebanon is of a great importance and there is a lot to do. However, this domain needs financing in order to create jobs and in addition to that it needs experts and specialists pioneering in this field to start those activities. It is also very important to raise awareness among the people in order to know that they should not take everything they find underwater because it may be of great cultural value and according to the 2001 UNESCO chart they can be sanctioned by the state in case they took these artifacts which are part of the national heritage. Mariane Mdawar

Lebanon is a small country, traumatised by war and political disagreement, but it has a heritage that appears almost infinite. The archaeological potential seems limitless, and on land it is noticeably being investigated at many sites. However, the maritime side of the country’s underwater cultural heritage is very much in its infancy, with only a handful of people engaged in this area of investigation. The need for further input into this area is desperate, and if funding sources can be developed, the NAS is ideally placed to further assist with helping to uncover more about Lebanon’s maritime past and in creating, supporting and developing local capacity.

Thanks for the success of the course goes to all the students who both worked well together and made the few days the tutors spent in the country so enjoyable. But particular thanks have to go to Dorothy, Lucy and Mario, who put in a lot of effort to make the course such a success—not forgetting of course the Honor Frost Foundation, which made the course financially viable. Many thanks to you all.

READ THE FULL REPORT FOR THE 2017 FIELDSCHOOL HERE

In mid-September 2018, with grant support from the Honor Frost Foundation (HFF) the Nautical Archaeology Society (NAS) delivered a training event in Lebanon, the course was held in the south of the country at Sidon under the guidance of Dr Wissam Kalil, Associate Professor of the Department of Arts and Archaeology at the Lebanese University in Sidon (Saida). The 2018 event, followed on from the success of the first Nautical Archaeology Society (NAS) course run in Lebanon during September 2017. 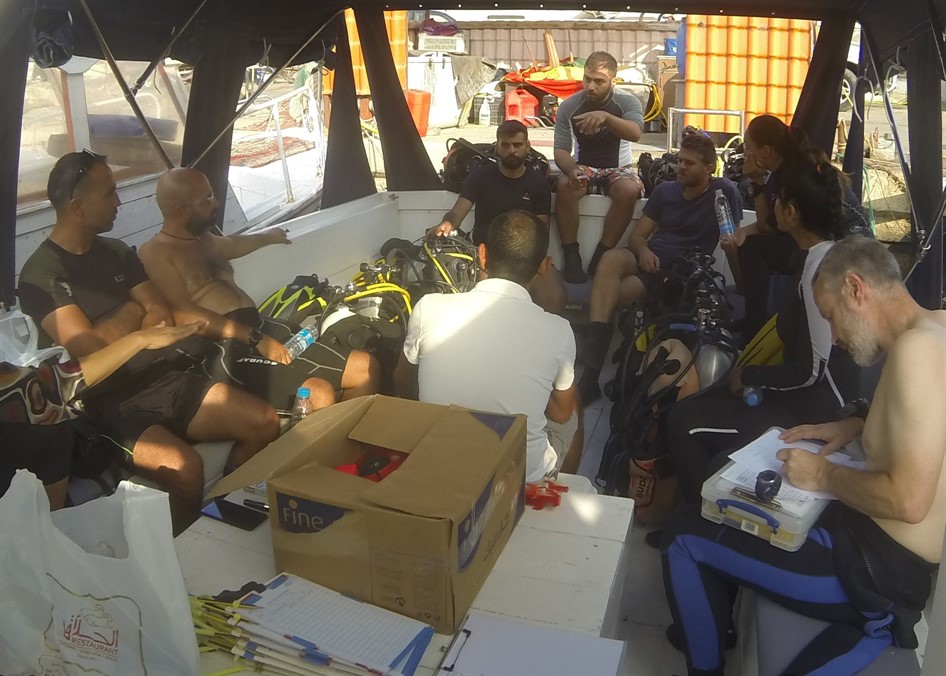 As all the students have Arabic as their first language, it was also recommended that, as the courses are run in English, having some material translated from English into Arabic would be beneficial. In this respect, in addition to generously funding the dive training and the cost of running the 2018 course, the HFF also kindly offered to provide the funding for the translation of the NAS eLearning courses “Introduction to Maritime Archaeology” and “Underwater Archaeology”. This was a very ambitious task, and at the commencement of the 2018 course only the summary of the two online courses and 4 of the 5 lessons from the “Introduction to Maritime Archaeology” course were ready to be presented to the students. The students were provided with handouts from these two courses in Arabic. 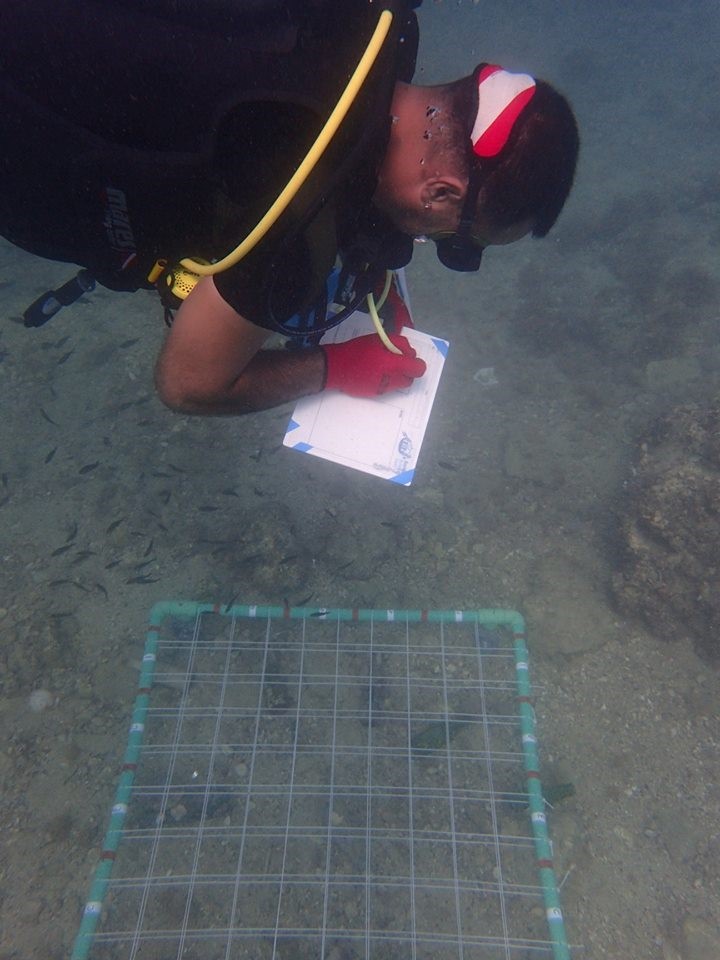 As was the case for the 2017 season, most of the 10-students that originally signed up for the 2018 course were non-divers, so prior to our arrival, local dive instructor Mario Kozaily ran open water dive courses for those that required the necessary training. 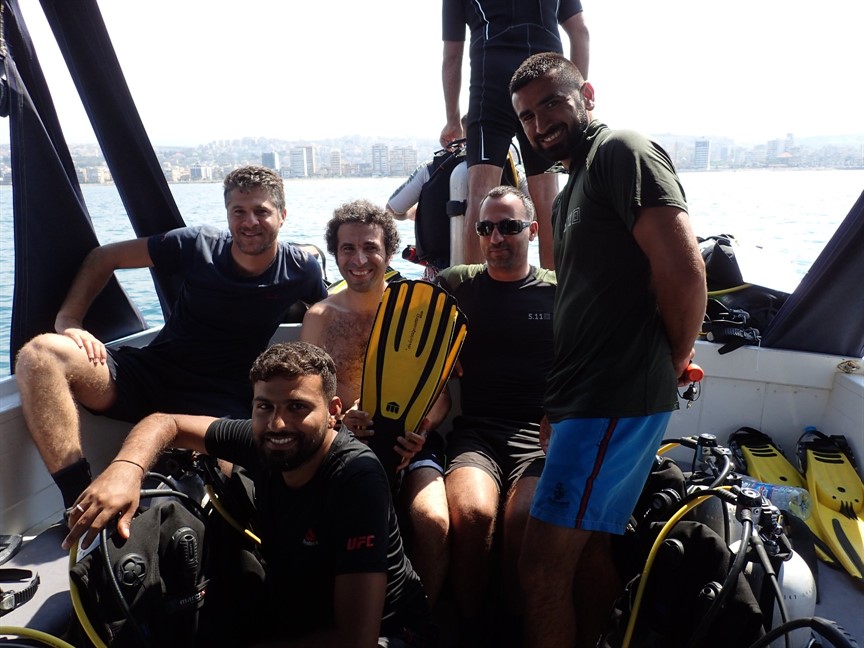 After two NAS events, there are now 17-students in Lebanon who all dive, have received NAS training and are enthusiastic about continuing in the field of Maritime Archaeology. While the team were in Sidon this year, they floated the idea with Wissam that possibly all 17-students could be put in contact with each other and encouraged to set up a foreshore and underwater maritime archaeology internet group with the intention of continuing with their own personal skills development, but also with the furtherance and advancement of the UCH in Lebanon.

“Learning to dive is one of the most rewarding experiences of my life. Earning my SSI scuba international and NAS certification changed the way I see the world, both above and below the surface. Our Mediterranean sea is full of secrets. Buried beneath the deep waters, lie the ruins of fascinating and marvelous relics long forgotten from ancient kingdoms and civilizations. My real passion though is for maritime archaeology, I’m always wondering what is hiding in deep waters and I can say that this is also something that motivates me to pursue this underwater archaeology dream. My future challenges will continue and expand; I will work on building the link between maritime archaeology and research project in maritime archaeology in Lebanon and abroad”. Fatima Sonbol

“This is my big challenge in my life; it changed my plans for future and all my directions. These seven days were wonderful, where I met the most amazing people Ian and Dave, I learned a lot from them, and I met new colleagues where we had an amazing time together.
The NAS training, ended all my fears from the sea and underwater, and open a new aspiration for the future. It helped me to understand the relations between the underwater and terrestrial sites. Moreover it shows for the Lebanese students how important is to help and preserve the nautical heritage and to act as a focus for nautical archaeology.
This experience it means a lot to me, I want to use it like a new way and new direction for the future. I hope to continue my postgraduate studies in this new field and all subjects related with “maritime archaeology “, and take a chance to join a maritime project (in Lebanon and abroad) and another dive training”. Sirine Ghiye 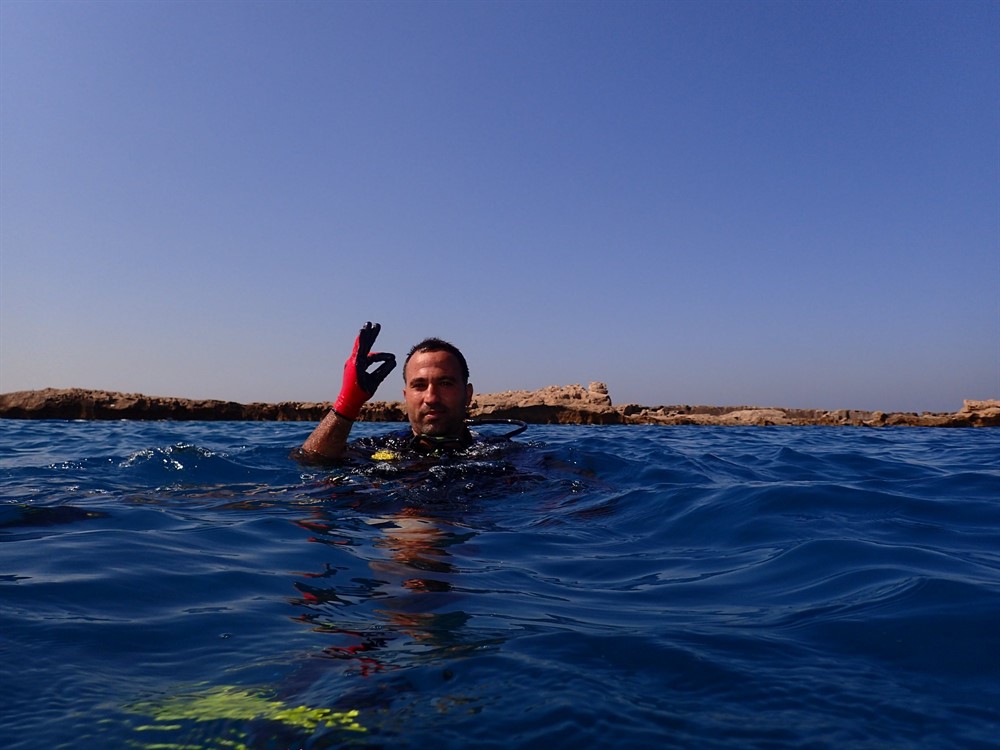 READ THE FULL REPORT FOR THE 2018 FIELDSCHOOL HERE